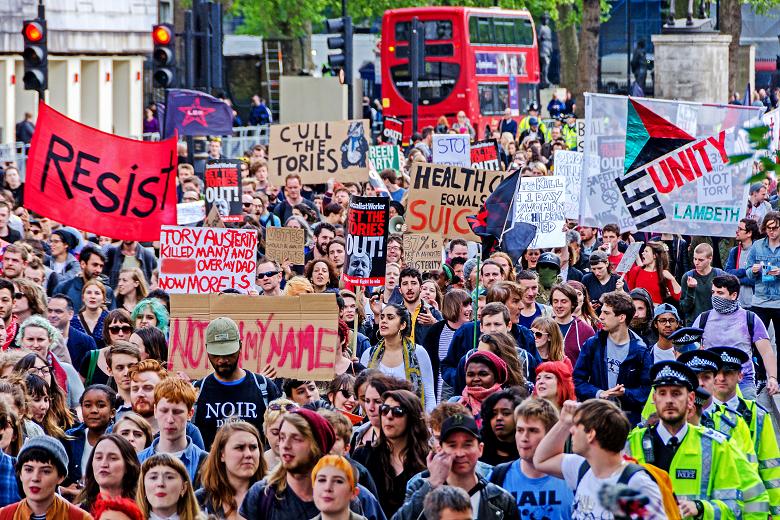 Move along folks, nothing to see here!

There’s going to be a protest march in London today. You might not hear about it on the news, but that doesn’t mean it isn’t happening.

This is the strange thing about the modern MSM, they seem to have collectively signed up to the Karl Rove doctrine. The Republican political strategist, and possible candidate for most evil man in the world, once famously told journalist Ron Suskind:

We’re an empire now, and when we act, we create our own reality.”

As much as this sounds like the crazy ramblings of a conservative zealot, when you apply it to the way the modern media-machine works, everything seems to suddenly make more sense. The media is an Empire now, too.

A sprawling mass of influence from one side of the “democratic” world to the other – hundreds of television companies, newspapers, magazines, radio stations and movie studios all owned by six – just six – mega-corporations.

That’s an Empire for the modern age, an Empire with logos and slogans in place of flags and anthems, but an Empire none the less.

And this Empire agrees with Mr Rove: That people in “reality based communities” are somewhat behind the times. That they can create their own reality, and make us live in it.

That’s the reason I mentioned that protest tomorrow. It’s going to happen, but whether or not the media will acknowledge this is very much up for question. There was a march last year too, you know, but nobody seemed to want to cover it.

On the 21st of June 2014 50,000 people marched through the streets of London protesting austerity, cuts to welfare, the possible break-up of the NHS and, generally speaking, the state of the country. Nobody covered it in the news. They didn’t smear it, or criticise it, or misrepresent it…they just didn’t mention it.

Now, I grew up in a household where “awareness” was prized – don’t believe the news, think about hidden agendas, what does this really mean? – I knew, from a young age, that a headline was usually a just a bold lie. But that the news-media, as a collective entity, could simply ignore something that happened shocked me.

But they did it – they tried to enforce their created reality….and they failed miserably. Because the news media isn’t the all-controlling force it once was…there’s new media in town.

Often times, when the MSM is embarrassed or shown up, it is the alternate media that is responsible but in this instance it was social media.

How do you pretend a march isn’t happening when every one of the 50,000 people marching have cell phones and facebook? How do cover up a protest when people can tweet their slogans to a million followers? How do you quash a story when the alternate media not only cover the story themselves, but then cover your lack of coverage as well.

Well, to put it simply, you don’t. What followed was one of the most embarrassing volte-faces in media history.

There are no people in this picture.

The Guardian finally ran a story covering the protest….at 8.45 pm, well after it was all over. And then proceeded to moderate the hell out of the comments section, removing anybody that dared comment on their editorial tardiness.

The BBC were in even more trouble – the march had been cannily planned to go right past television centre. There was even a tweet about it from a BBC employee…which was soon removed. Their official “report” came out the next day. It was a paragraph long. People that complained were treated to a form letter full of corporate double-talk and nonsense.

The New Statesman delivered a delightful piece, deciding to defend the media en-masse by declaring the march “not important”. Which is disingenuous to the point of madness – 24 hour news channels and feeds and the ever increasing need for non-stories simply to host advertising space has made it so EVERYTHING is interesting. A glance over the New Statesman front page today shows me headlines like “Why we buy shoes we’re never going to wear” and “What porn actors don’t talk about”. Both of which, I assume, are considered more important than whether or not pensioners can afford to heat their houses.

Travelling back through time to last June, the BBC front page hosted a story about thousands of Druids meeting at Stonehenge for the summer solstice – but didn’t cover twice that many chanting right outside television centre. Because it wasn’t important.

The Guardian is trigger happy when it comes to BIG RED LETTERS and LIVE FEEDS and BREAKING NEWS. They love to have rolling comment and minute by minute updates. 20,000 people protesting government spying in Macedonia makes the front page (the larger, pro-government march a few days later was never even mentioned, but that’s another issue). 7000 people attending Boris Nemstov’s funeral in Moscow got a live feed. Smaller marches, in foreign countries, more important and more interesting than people – including Russel Brand, Caroline Lucas MP and Owen Jones, their employee – giving speeches in Parliament Square.

The MSM are trying to control what we see and hear. Trying to dictate to the masses the very nature of their reality. It is not working, and it will never work as long as people have eyes that see and ears that hear and thumbs that text.

The shameful backwards step the news-sources took last June demonstrates this perfectly. The Media, and the army of people it employs, need to realise just how impossible their chosen task is, and just how out of touch they are with their own obsolescence – and obsolescence is surely what it is.

It has never, in human history, been so easy to communicate. Cell-phones and e-mail have effectively, in huge stretches of the world, made it more difficult to be out of touch than in contact. Cheap web-space and blog templates mean that, if no one will print what you’re saying, you can just say it yourself. The very web-site you’re reading is proof of this.

There’s a reason RT is listed along side terrorist organisations and dissenting comments are moderated to oblivion on the Guardian.

There’s a war being fought. A war between the MSM and the “reality based communities” that people like Karl Rove deride. And, right now, the MSM are losing. You might not hear about it on the news, but that doesn’t mean it isn’t happening.

More to the point, what are editors thinking when they choose to ignore a story? I mean, who precisely are they not covering a story for, and how do they finesse their own conscious process of reasoning while doing so?

How do we interrupt their ability to rationalise?

Brilliant piece. It actually makes me fear for the future if enough people are not aware enough to fight this.
I would like to know also who benefits and when did this conspiracy of silence begin.
It seems despite iraq war lies they have doubled down and become more threatening under obama

And while this sizeable protest was going on in London, where was Vicky Nulands and her cookie jar?

Buried on the virtual page 29 of the www, but it’s there @ http://news.yahoo.com/russell-brand-charlotte-church-address-anti-austerity-march-085446544.html

R: The question therefor arises as to whom [or what] has the power to stifle [and thus steer] any such [non-existing] debates.

As per usual, cui bono?