Former NIST Employee Speaks Out with LTE in Europhysics News 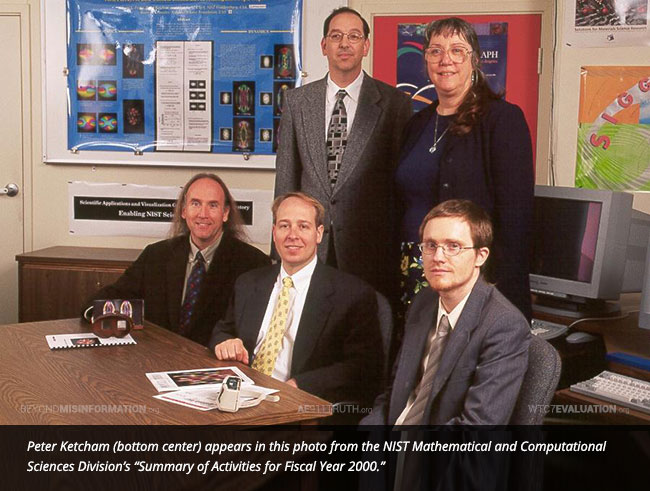 Two days ago, Europhysics News released its first issue since the publication of “15 years later: On the physics of high-rise building collapses,” which has now been viewed nearly 350,000 times since its release — and which even caused the magazine’s server to break down at one point.

Lo and behold, on page 43 is a startling and extraordinary letter to the editor by a former employee of the National Institute of Standards and Technology (NIST), Peter Michael Ketcham, who worked at NIST from 1997 until 2011. 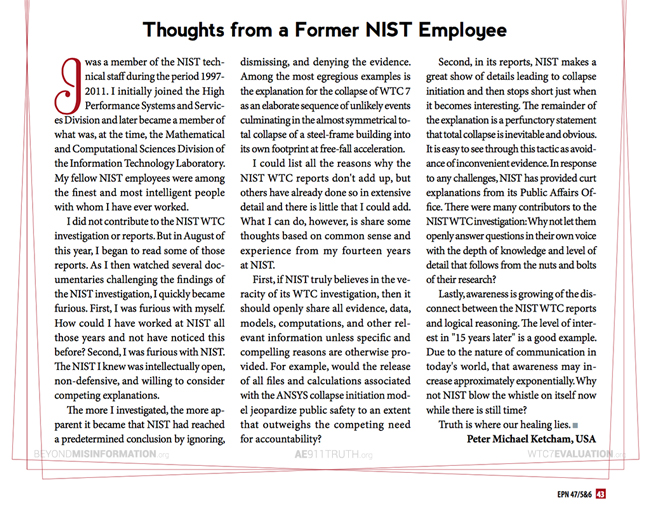 In his letter, Mr. Ketcham makes it clear that he did not contribute to NIST’s World Trade Center investigation. In fact, it wasn’t until last August that he began reading the NIST WTC reports and watching documentaries challenging NIST’s findings. The more he investigated, he writes, “the more it became apparent that NIST had reached a predetermined conclusion by ignoring, dismissing, and denying the evidence.”

Mr. Ketcham closes his stunning 500-word rebuke by calling upon NIST to “blow the whistle on itself now” before awareness of the “disconnect between the NIST WTC reports and logical reasoning” grows exponentially.

The courageous stand Mr. Ketcham has taken in criticizing the reports issued by his former employer of 14 years is yet another sign of the rapidly increasing skepticism toward the official 9/11 narrative among scientific and technical professionals. No doubt, his emergence will help accelerate the path toward exposing NIST’s WTC reports as false and unscientific.

It is very timely Mr Ketcham addressed the original creatioNIST agnotology, given the early results out of Alaska contesting the NIST WTC7 algorithm.
http://action.ae911truth.org/o/50694/t/0/blastContent.jsp?email_blast_KEY=1360925
“Dr. Leroy Hulsey, chair of the Civil and Environmental Engineering Department at the University of Alaska Fairbanks (UAF), is now 18 months into his two-year computer modeling study on the collapse of World Trade Center Building 7 (WTC 7). Dr. Hulsey first announced his preliminary findings at the Justice In Focus conference in New York City on September 10 and 11 [2016] — where he stated categorically that there was “zero” probability that WTC 7 collapsed due to the fires it experienced on 9/11.”
Zero probability.
Whereas CIA and other controlling entities are concerned with controlling ‘over-commitment to any one theory, or against the illicit transformation of probabilities into certainties,” anyone studying the results will understand very quickly UAF finding the ‘magic bolt’ axial expansion was in exactly the opposite direction to that stated by NIST in the official account – once UAF factored external structures into the model – a critical forensic toward proving the NIST fraud.

The NIST Propaganda is still being spewed about heat causing collapse of WTC 1&2. Also about the Towers not having any Fire Protection or a Reinforced Concrete Core. Skyscrapers Still use the “Tube in a Tube” Construction, Special Concrete and High-Alloy Steel and Bolted and Welded Joints. TV Program Quest on UK TV about learning from Building Disasters Propaganda. Obvious Explosive Demolition of The WTC unable to be faced by the World High-Rise Construction Industry.

Phillip D Zelikow might be a good place to start, but then there’s lots of Neocons and Zionists which need to be ‘deeply probed’ as well.

This comment was in reply to James Carless below……..

Indeed- Zelikow is on a list of names of people that 100% MUST have been involved- due to their positions prior to the day, on the day, or in the cover-up. They include: Wolfowitz, Rumsfeld, Cheney, Meyers, Silverstein, Lowey, Libby, Zakheim, Clarke, Armitage, Canavan, Michael-Jenkins, Andrews, Wirt-Walker, Carlucci, Bin-Sultan. Companies and organizations involved include: Raytheon, Kroll, Merril Lynch, Stratasec, Carlyle, SAIC, Rand, JSOC, CIA, FBI, FEMA, NIST, FAA, NORAD, Secret Service….
kevin ryan has pretty much nailed it all down. It’s no real mystery ‘who dun it’…. unless your eyes are wide shut. The last contested mystery is who ordered them to do it…

Thanks for that link…….A lot of interesting names there……..

many Zionists were involved- but it was by no means simply a Zionist cabaal (in my opinion). I don’t think there is such a one dimensional explanation of the greatest crime of our age. I call it that becuse it lead directly to the illegal Iraq invasion- caused the death of perhaps a million people- and has lead us directly to ISIS. It was a tremendously complex affair- Kevin Ryan has gone far down the corporate/state rabbit hole- as has Alien Scientist:

for the deepest depths of the rabbit hole- Here is something really odd- a very strange document- the affadavit of a very strange man- General Earle J Cocke
http://www.bibliotecapleyades.net/sociopolitica/projecthammer/contents.htm

“Where there’s smoke, there’s fire”, and yet American politicians all the way up to the President, don’t want to discus the crime behind 9/11, but continue focusing on “Terrorism”, “Keeping America Safe” and how evil Vlad Putin is…..

I forgot PNAC! who could forget PNAC? That was basically the job application for the 9/11 false flag. It tells you now only that it was required as a ‘catalyzing and catastrophic event- like a New Pearl Harbor’ it also tells you why they did: to expand US hegemony over the entire world over the next 100 years no less.
This article is great news that someone from NIST has finally come out and stated their incredulity over the NIST reports. He identifies the ever growing elephant in the room well when he says, ” “the disconnect between the NIST WTC reports and logical reasoning”.

PNAC…..”Project for the New American Century”?
One has to wonder what PNAC had to offer the American people, when in fact it was written by “those who are not American”(well, America is their second choice). Certainly, “Globalisation” has made millions of American workers obsolete, so, when is America going to benefit?
Time must be almost up for the frauds who sold America out.

Then there was the initial FEMA report too. I so hope this means the truth is finally closing in.

Once a true investigationis completed and the scientific resultsmadepublic, the individuals involved in the NIST coverup should not only be fired, thay should be charged with treason! Every last one of them should spend the rest of their lives in prison!

Meant to put my comment above as reply to this one.

Accessory after the fact, true. Hardly encouraging the guilty to ‘fess up tho. Might perhaps be more fruitful to cut some plea bargains in order to catch some bigger fish?

“Every last one of them should spend the rest of their lives in prison”
Guantanamo Bay would be better, because it is excised from the American Legal System, and cruel and inhuman torture is quite popular there(amongst the sadistic jailers)
And, of course, forfeiture of all personal assets will go some way to reducing America’s out of control National Debt…….

Just line them up before the victims families in a kind of ‘Truth Commission’ scenario.
With the final questions being ” Who were you working for ? Who supplied your conclusion ?
Who bought the years of silence and lies ?