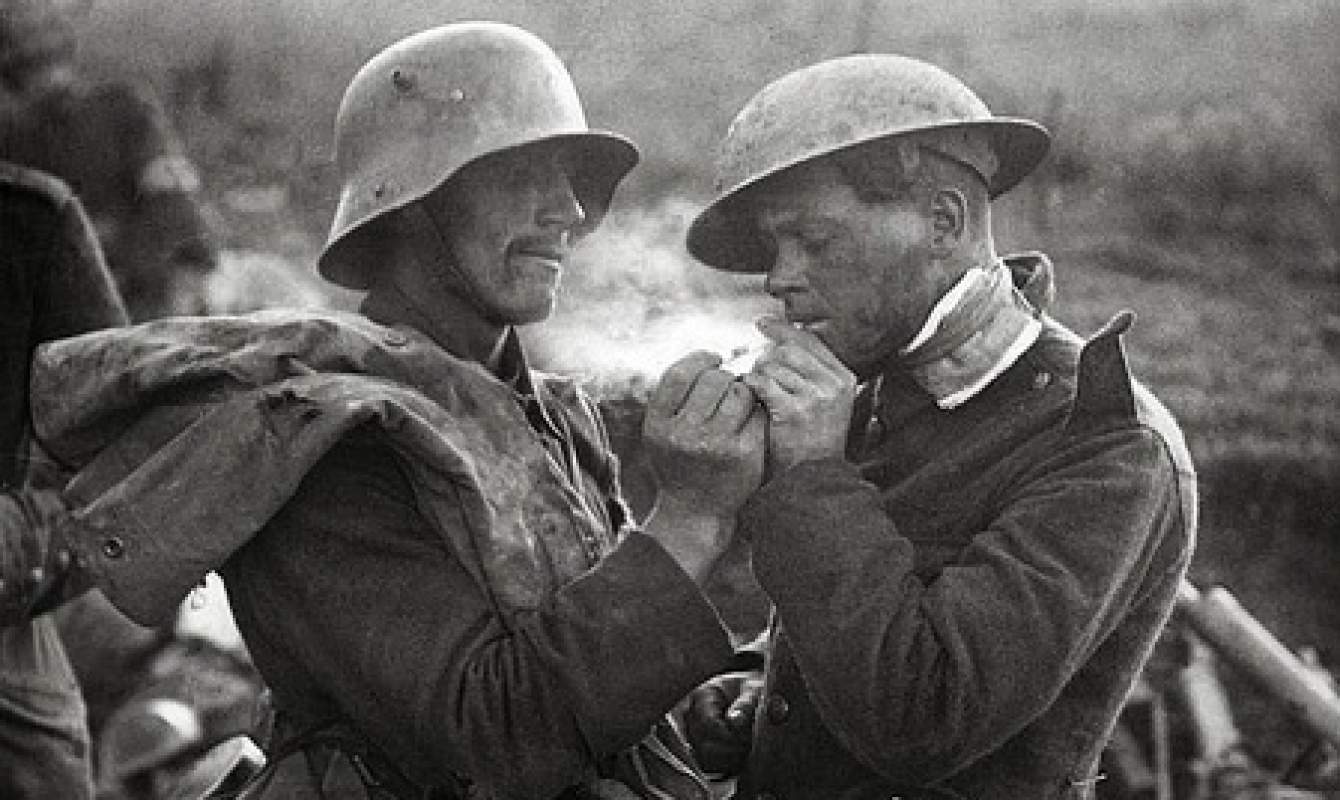 The unofficial Christmas truce of 1914, year 1 of the Great War, saw German, British and French soldiers defying orders to openly fraternise in no-man’s land and even in each other’s trenches. Gifts were exchanged, carols were sung. Peace reigned in the midst of war.

This was not to the liking of the military establishment, and the following year the artillery was made to fire on no-man’s land throughout the Christmas period, to prevent any further spontaneous gestures of friendship. But still the event remains to us as a small expression of hope that humanity can find a way to unite, in defiance of the incessant drive to division and conflict.

One firsthand witness to this spontaneous rejection of hatred and hostility was British officer Captain Alfred Chater, 2nd Battalion Gordon Highlanders, who wrote of his experience in a letter to his mother.

I am writing this in the trenches in my “dug-out” — with a wood fire going and plenty of straw it is rather cosy, although it is freezing hard and real Christmas weather.

I think I have seen today one of the most extraordinary sights that anyone has ever seen. About 10 o’clock this morning I was peeping over the parapet when I saw a German, waving his arms, and presently two of them got out of their trench and came towards ours.

We were just going to fire on them when we saw they had no rifles, so one of our men went to meet them and in about two minutes the ground between the two lines of trenches was swarming with men and officers of both sides, shaking hands and wishing each other a happy Christmas. This continued for about half an hour, when most of the men were order back to the trenches.

For the rest of the day nobody has fired a shot and the men have been wandering about at will on the top of the parapet and carrying straw and firewood about in the open – we have also had joint burial parties – with a service for some dead – some German and some ours, who were lying out between the lines…

This extraordinary truce has been quite impromptu – there was no previous arrangement and of course it had been decided that there was not to be any cessation of hostilities.

I went out myself and shook hands with several of their officers and men. From what I gathered most of them would be as glad to get home again as we should… The truce will probably go on until someone is foolish enough to let off his rifle…

Here is Jaques Pauwels’ account of this period, taken from his book The Great Class War 1914-18. A longer extract is available on Global Research.

…In any event, the authorities were also unable to prevent the wave of fraternizations that took place on Christmas Day. In the vicinity of Ypres, the sector of the western front that was held from September-October of that year by the British and became known to them as “Flanders’ Fields,” it already started on Christmas eve. The Germans decorated trees near their trenches with burning candles and started to sing Christmas songs such as Stille Nacht, “Silent Night.” The British reacted by lighting bonfires and singing English Christmas carols. Then the soldiers on both sides started to loudly call out Christmas wishes. The Germans arranged to deliver a chocolate tart to the British, accompanied by an invitation to conclude a truce. Shortly thereafter soldiers crawled out of their trenches in order to fraternize in no man’s land and in each other’s trenches.

That sort of thing continued on Christmas Day itself, and in some sectors even on Boxing Day. Presents such as tobacco, whiskey, and cigars were exchanged, and the two sides helped each other to bury the dead. In the no man’s land a soccer game was also played, which the British claimed to have won. An English soldier wrote in a letter that this was “the most remarkable Christmas” he had ever experienced, and that he “had had the pleasure to shake hands with numerous Germans,…to smoke together and to enjoy a friendly chat.” A favourite conversation topic was the madness of ta war of which both sides had had more than enough.

Between the British and the Germans the unofficial Christmas truce affected virtually the entire front of approximately forty kilometers along which they faced each other. In some sectors of that front the truce dragged on until New Year’s Day. Some historians claim that the Anglo-German fraternizations of the end of December 1914 were nothing less than “massive.” But on Christmas Day similar truces and fraternizations also occurred between the Germans and the French. Barthas confided to his diary that, in their sector, the morning of Christmas witnessed “singing and shouting and the firing of flares” and that no shots were fired. And it is known that poilus met boches to sing and exchange tobacco, cognac, postcards, newspapers, and other presents in the vicinity of Soissons and in villages of Picardy such as Cappy and Foucaucourt.

A poilu later remembered that “The boches signalled us and indicated that they wanted to talk to us. I approached to three or four meters from their trench in order to talk to three of them who had surfaced…They asked that we would refrain all day and night from shooting and said that they themselves would not fire one single shot. They had enough of the war, they said, they were married and had nothing against the French, only against the English. They gave me a box of cigars and a package of sigarets, and I gave them a copy of [the magazine] Le Petit Parisien in exchange for a German newspaper. Then I withdrew to the French trench, where many men were keen to try my German tobacco. Our neighbours on the other side kept their word, even better than we did. Not even one single rifle shot was fired.”

There were many other sites along the front where groups of French soldiers visited the German trenches in order to enjoy a drink, or where Germans came to offer cigars to the Franzosen. Christmas carols were performed in both languages, for example Minuit chrétien and O Tannenbaum. Belgians and Germans, who faced each other in the lowlands of the Yser River estuary, allegedly also fraternized on Christmas 1914. The Germans agreed to mail letters from Belgian soldiers to family members in occupied Belgium. At the eastern front it also came to fraternizations. The Russians met their Austrian-Hungarian enemies in the no man’s land in Galicia and exchanged the usual tobacco, but also schnapps, bread, and meat.

The superiors were far from enchanged with the Christmas truces, but could not prevent them. On the British side an officer rushed to the scene with this intention, apparantly from the safety of the rear, but he arrived too late. His men had already started to socialize with Germans in the no man’s land. He could only resign himself to the fait accompli. He himself and a handful of other officers ended up joining their subordinates and went to greet the German officiers. One of the latter ordered beer to be fetched for everyone, and the officers courteously drank to each other’s health. A British officer reciprocated by treating those present with pieces of a traditional English plum pudding. It was finally agreed that the inofficial truce would last until midnight, so that everyoone would have to be back in their own trenches by midnight. The “damage” done by the fraternizations, at least from the viewpoint of the superiors, was thus limited somewhat, at least in that sector.

The higher the rank of the superiors, the less they liked this strange Christmas idyll. The British commander in chief, General French, who on Christmas Day enjoyed a gourmet dinner, featuring turtle soup, with as digestif a brandy from 1820 offered by the Rotschilds, issued a specific order to nip in the bud any future attempts to fraternize. One year later, the artillery would be made to fire into no man’s land all day, starting on Christmas Eve, in order to prevent any meetings there. However, it proved impossible to prevent fraternizations to occur here and there and from time to time…

Lastly a memorable scene from Richard Attenborough’s film version of the anti-war musical “Oh What a Lovely War.”

Today the Christmas truce would very likely be portrayed by Hollywood (if it was portrayed at all) as either a sentimental interlude stripped of its social and political meaning, or a huge mistake, driven by gullibility. A brave American would warn everyone it was a cunning plan by the Germans (or even the Russians since historical accuracy really isn’t in vogue any more (see the revisionism and lies in the ghastly Hamilton musical), and all who who failed to heed him would end up dead. The approved message: war may not be nice, but it is always necessary. Anyone who seriously questions this is likely to be dismissed as a lunatic or an agent of Russia.

But still, the Christmas truce of 1914 happened. Ordinary people of different nations came together to express their common humanity and disgust with a war they did not want and which exploited them all for the enrichment of a psychopathic elite. This small fact should give us all hope.

I just don’t get how a great speech can benefit from unremarkable music practically drowning it out.
Must be a fashion or something. It’s everywhere today, especially on YouTube.
Quietness is a prerequisite for meditating on any serious subject, and, heaven knows, this is serious enough.
We need to digest speeches like this with our heart and mind, not think of them as some kind of dinner music.
Thanks for posting it though!

I’m referring to the Veteran war speech at the bottom here, by the way.

‘Defying orders’
We need a plague, an epidemic of ‘defying orders’
Then, if we are really lucky, wars will end.
Anarchy (rules WITHOUT rulers) = the end of war.

By December, 1914 WWI soldiers didn’t wear steel helmets. So this picture must have been taken on later circumstances and scenario. EG. at a POW camp…

It also occurred to me that somebody had a say in the design of those helmets…
Just look at how vulnerable the Brit/French soldier is, all around his head, while the German seems much better protected.
Why did somebody decide upon the inferior design?
Cheaper, I suppose…

An excellent post, thank you for writing it. The link below, if you are interested, is to a piece about Gallipoli in 1915 where one of my ancestors fought – and the uncritical ‘every day’ around the topic of militarism in our societies. Something completely unacceptable a century after the horrific carnage and tumult of World War 1.
https://sentient-seas.net/2016/04/25/anzac-day-militarism-and-the-critical-every-day/

I must admire the sheer nerve and skill of the Anglo-Capitalists who for 4 years shepherded soldiers into the mincing machine until every war aim had been achieved: to cripple Germany as an economic competitor, to take over the Turkish oil fields for BP, and to set up his National Home for dear Lord Rothschild.
As for common soldiers observing Xmas Truce against the wishes of Our Leaders, Hermann Goering said the last word on this phenomenon: “Naturally the lad from the farm does not like war, because all he can hope from victory is that most of him will return home and in working order”.