Newspaper “Ilinden”: Dr Marcus Papadopoulos, please provide a short biography to introduce yourself to the readers.

Dr.Marcus Papadopoulos is the publisher and editor of Politics First, a non-partisan publication for the UK Parliament.

Macedonia is a region.
Alexander the Great is Greek.
The four ‘small’ countries should reunite!
Spoken like a Greek!
tired of all this rubbish.
Travel though India and Pakistan and the people in certain districts speak of Alexander the Great the Macedonian!
They speak Macedonian and practice Macedonian cultural practices.
Which Macedonian in the last 500 hundred years went to India and taught Indians and Pakistanis Macedonian…THAT IS MACEDONIAN, not Greek, the one that I speak and understand today.
Not the Macedonian with a Serbian, Bulgarian or a Greek slant (no fault of the people, blame the English, Germans and French!!!! we all spoke the same before their decision to cut Macedonia up!!!!!)
Oh that is right!!!! It must have been the great Macedonians solders, Alexander the Great!!!!!!!!!

the Republic of Macedonia is correct to say that it is a direct descendant of the Macedonian Empire of Alexander.

That is an absurd statement
There are no direct descendants of the Macedonian Empire of Alexander. This is an order of magnitude more laughable than the claim that modern Egypt is a direct descendant of the Ancient Egyptian kingdoms that built the pyramids.
Modern Macedonia is a 20th century creation as a result of the policies of the Serbian and later Yugoslavian states.
We are not talking about something that happened in ancient history here, we are talking about something for which extensive historical documentation exists.
Such as ethnographic maps of the Balkans from the late 19th and early 20th century, and countless writings from that time.
Here are a couple such original maps from back in the days: 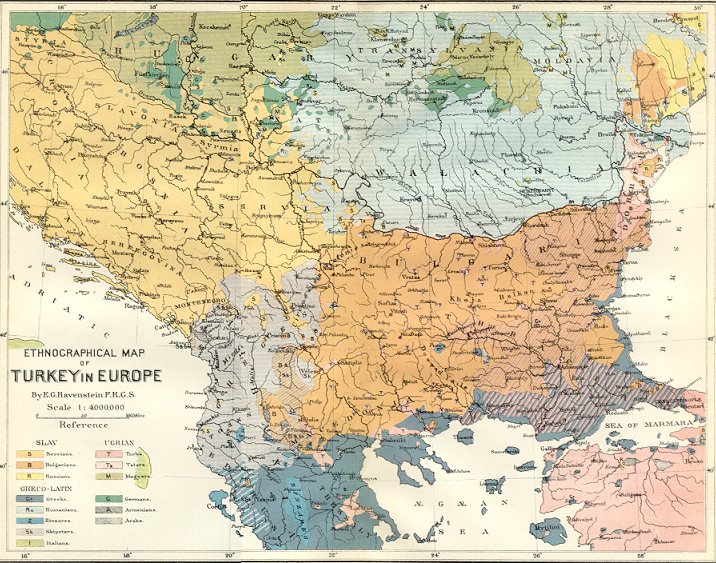 No trace of a Macedonian ethnicity there
Neither will you find it in the written records from the period.

I am afraid that the Great Game is still played and it is the people of smaller nations of geostrategic importance who always pay the price.
Eastern Europe was and is a Great Game between US, Soviet Union/Russia, the EU and, to a minor extent, Turkey. South Stream was vandalised purely because Americans are too psychopathic to allow Russian gas to be traded in the EU. They have to make EU serfs to US controlled gas, be that pipelines through Syria, LNG from wherever.
Until the world unites enough to throw every American out of every country as they cannot behave properly anywhere in the world, nothing will change. If Russia, China or anyone else simply sees them as the new mafia hood taking over markets after gangland killings, nothing will change even if the Americans are thrown out.
And if the result of the Great Game stopping is regional genocides, then is that better or worse than the Great Game?
You will not be surprised to hear that jone of those crucial questions are ever raised, anywhere, in Uk political life. If we had a principled, sovereign politics (we do not, we are vassals to the USA), they would be aired regularly as a central feature of foreign policy debates.

Until the world unites enough to throw every American out of every country as they cannot behave properly anywhere in the world, nothing will change

I was right: Russian propaganda spreads anti-American disinformation. It seems to be working very well.

Given the US record of malignant interference across the world, it sounds like a good idea, in relation to all US military, diplo-thugs, US ‘regime change’ outfits like the NED, and NGO interferers. US tourists or other non-official visitors ought to be made welcome, but closely monitored.

“Since my childhood, I have had a fascination and passion for the former Yugoslavia”
That rang bells with me, because when I was in my 20’s I fell in love, with a girl in England, who’s parents were born in Yugoslavia. She was a beautiful girl in every way, and her family welcomed me into their home as if I was family. This was in the 1970’s. we were together for over a year, and everyone thought we were going to get married. But something went wrong, and we didn’t though we never betrayed each other. We were faithful we were young lovers.
So I met another girl and we had children. Our children went to The Greek Islands, and The Greek Mainland when they were very young – for over 10 years. In their holidays. Our children grew up in Greece..
During this time in the early 90’s one of the Children’s entertainers at the holiday resort in Halkidiki, got summoned whilst we were there to go back to Croatia..He was only about 16 himself..
He was being summoned to go to war and become a soldier..
This was in Europe – we found this almost completely unbelievable. He was such a lovely boy. We hadn’t had a war in Europe since before I was born..
And then a few year later in 1999, my family were travelling back home at Easter from The Indian Ocean. We had had no news for 2 weeks – but they passed us The Newspapers on the plane.
My country England was bombing the hell out of Serbia…
How could they do this??? I was completely outraged. All my Ex’s family came from Serbia , and my country was bombing them to hell. Why?
Then it got worse. 9/11 – it took me 18 months to realise the official story was impossible, and I told everyone – which had seriously negative effects on my career. But I wasn’t going to lie…
Then about 10 years ago, I learnt the truth of what was going on in Serbia, with regards to capturing the most beautiful teenagers in the world (completely unconnected to the war), and removing all their essential body parts, and shipping them to hospitals in The West via The KLA. Then killing them.
This atrocity was so completely beyond my understanding of the human race, that I had to tell someone. It was a friend who works in The Medical Profession. She couldn’t handle the truth, yet she was trained to handle the truth. I could never tell my wife, nor my ex. They are lovely innocent people, and their souls would be corrupted if they knew such evil went on.
The EU issued a full report a few years later, which I again read today.
How can such evil go on in a civilised world, and be supported by The UK and USA Governments?
http://www.vaseljenska.com/english/ex-kla-describes-how-he-butchered-serbs-in-kosovo-human-organ-trafficking/
Tony

Tony…thank you for telling us a story from your past…. a very touching one. It is true that the term Balkanization is still being used in the ongoing attempts at dividing Syria and perhaps Iraq and other targets in the future. I hope that those 4 small countries see fit to reunite and do as the author of this article suggests. The part of ‘organ harvesting” is horrible…. truly war crimes .

“…was undermined and destroyed by America, Germany and certain other European countries. ”
One re-reads something read many years ago in a different light in the face of more recent history:
“A “Troika” was sent in….” (Yugoslavia an avoidable war – Nora Beloff)