The Boston Globe’s Hit Piece on the Assassination of Senator Robert F. Kennedy 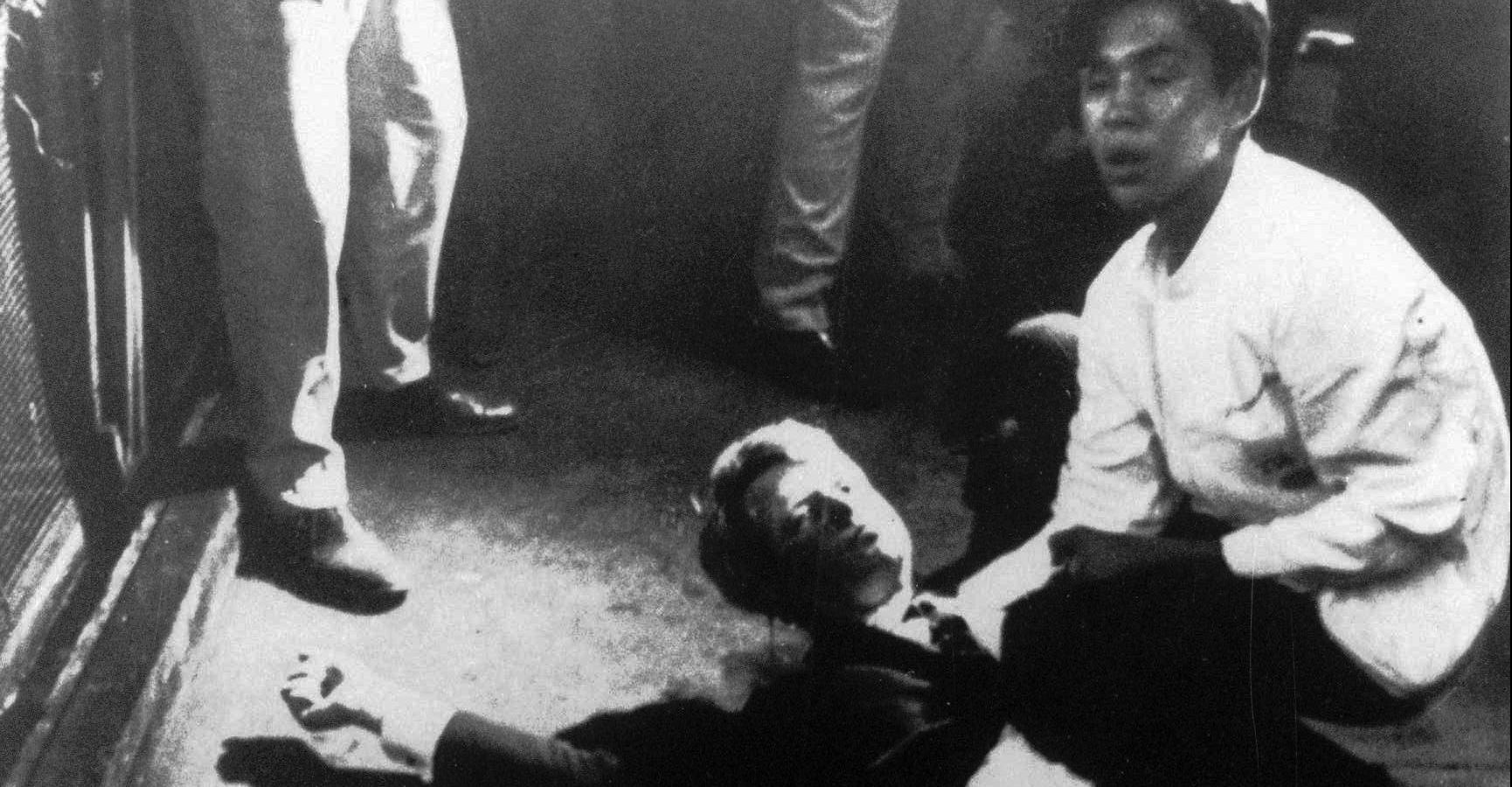 The Boston Globe, the traditional hometown newspaper of the Kennedy family, published a clearly misleading piece on May 31, 2018 by Nik DeCosta-Klipa, with the curiously long and loaded title:

Bobby Kennedy’s son thinks he was killed by a second shooter. Is there anything to it? Or has RFK, Jr. “launched a whole new generation of conspiracy nuts 50 years later.”

Whether DeCosta-Klipa was acting on orders from above to produce such a specious piece or is ignorant of the fundamental research in a case that shouts out conspiracy is a question I cannot answer, although based on his go-to “expert” in his article – Daniel Moldea, whose contradictory disinformation on the case is well known to serious researchers – I would guess the former to be correct.

Let me begin with the title, which is marvellously propagandistic and sets the naïve reader’s mind on the intended trajectory.

RFK Jr.’s recent claim in The Washington Post of a second shooter and his call therefore for a re-investigation (a redundancy since no genuine official investigation was done; it was a cover-up from the start) is followed by a question: Is there anything to it?

This is followed by a headlined quote from Moldea, repeating the CIA created meme about conspiracy nuts: Or has RFK Jr “launched a whole new generation of conspiracy nuts 50 years later.”

A question mark for RFK, Jr., while Moldea is allowed an assertion in the title that is not followed by a question mark. Language is the key to effective propaganda, including punctuation. It is a very subtle art, at which our mainstream corporate media are adept.

But if you think I am being picky, let me explain further.

DeCosta begins by asserting that “conspiracy theories concerning President John F. Kennedy’s death may be most widely circulated.” Thus the reader is led into this article with the insinuation that of course Lee Harvey Oswald killed JFK and anyone who questions that is a conspiracy nut.

So what about RFK’s murder?

As the night follows day, we meet conspiracy nuts here too, courtesy of DeCosta-Klipa who allows Moldea a free hand to spout nonsense. A person not familiar with the research done on this case by the great researcher Lisa Pease and others would assume that Moldea was the expert par excellence on RFK’s assassination, when nothing could be further from the truth.

James DiEugenio, Pease’s colleague and an equally brilliant researcher, has surgically dismembered Moldea’s work on the case.
So why has DeCosta-Klipa shined the spotlight on Moldea and given him so much space?

It is unlikely that he has read Moldea’s 1995 book, The Killing of Robert F. Kennedy, a book about which DiEugenio rightly says:

[its] every major tenet is highly suspect, whose sourcing is not explicit, whose fairness is, to say the least, one-sided, whose completeness is just not there, whose use of witnesses-like Kaiser and McCowan-is rather lenient […] it is a ‘bookshelf’ book that has no intellectual content or substance.”

He suggests it was commissioned by the government forces responsible for RFK’s death and the ongoing cover-up.

To claim absurdly that the LAPD messed up and was not involved in the sinister plot and cover-up.

To rip Robert Kennedy Jr. with the words “What Bobby Kennedy Jr. has done, he’s launched a whole new generation of conspiracy nuts who are going to believe that Sirhan didn’t do it and somebody else did.”

To utter the word “conspiracy” and “conspiracy nuts” constantly and to have that word repeated throughout by DeCosta-Klipa, as if he were Moldea’s echo. The word conspiracy is used nine times in a highly pejorative sense.

(The conspiracy was created by the CIA in 1967 to besmirch the name and reputation of anyone questioning the assassination of President Kennedy. CIA agents and assets throughout the mass media were encouraged to use it constantly. Of course they have.)

To preposterously claim that all the eyewitnesses were wrong and that since the autopsy definitively showed Kennedy was shot from the rear at point-blank range that he must have turned around so Sirhan, who was standing feet away to the front could shoot him in his back and head. To which, of course, DeCosta-Klipa has no reply, as if it weren’t ridiculous.

To falsely claim – lie – that Paul Schrade, an aide to the senator, who was walking behind him and was the first person shot, fell into RFK, pushing him toward Sirhan, when in fact Schrade fell backwards feet behind RFK.

To absurdly claim that the many bullet holes found in the door frames and wall weren’t bullet holes at all, but in DeCosta-Kipa’s words, paraphrasing Moldea, “were most likely the result of any number of kitchen carts banging into the wall.”

To claim that the man highly suspected of having shot Kennedy from the rear, the security guard Thane Eugene Cesar, is innocent since he told him so. But he doesn’t say that Cesar fled the country and is living somewhere in Asia under Moldea’s protection.

To claim the highly suspect police investigator of the shooting, DeWayne Wolfer, who also falsely asserts that no extra bullets were ever found, is a reliable source, despite extensive evidence to the contrary.

And to top it off, DeCosta-Klipa grants Moldea the final words:

“I think [RFK Jr.] has been misled, conned, and corrupted by the conspiracy crowd to believe this garbage that the man that murdered his father is innocent.”

The truth is the readers of The Boston Globe have been misled, conned, and corrupted by a classic piece of propaganda.

It is a disgrace.

To bring Ted Kennedy into the discussion, the evidence, I believe, leads to the inevitable conclusion that he was framed. They (the deep state aka muder inc.) couldn’t kill a third Kennedy, so they murdered MJK, drugged Ted — giving Ted the choice of sounding crazy with the truth or begging for forgiveness for a tragic ‘drunken escapade’. See cutler and ratical dot org.

Why has the media NO INTEREST WHATSOEVER in the truth regarding important political matters? Rather the exact opposite. That the media is enemy of the people is obvious.

When one considers the Presidential Puppets that followed the Kennedys, it certainly points to a ‘convenient’ assassination.

Well personally I believe that Sirhan Sirhan killed Kennedy. But I know I’m not going to convince you if you want to believe otherwise. That’s up to you. There’s little point in my trying to explain why I believe that.
I do think however that there is a case to be made for his release. He’s been in prison for 50 years. I think Kennedy would probably be inclined to clemency for his killer after all this time.
It was a tragedy that he was murdered. He may have ended the Vietnam War early and maybe even ended the Cold War many years before it was finally ended.
But that didn’t happen. He was killed 50 years ago today. RIP Bobby.

So, if we were bothered, we now need to waster several nano-seconds pondering whether you are a brainwashed dup, or a knowing disinformer. Life’s too short.

This bloke was always gonna be ‘bulletproof’
https://www.counterpunch.org/2018/06/06/the-stupefying-mediocrity-of-barack-obama/

The mainstream media represent a significant arm of the mind capture of the many and as such it is defended against anything that would seriously interrupt the programming. Not that the many cannot be herded and caged again by carrot and stick.
Robert does good work on Vaccine safety – or the lack of – and has done much environment work against toxic industrial discharge – which is a genuine environmentalism and not a captured and subverted movement reframed around CO2.
Post truth (politics by stealth and deceit) is nothing new – but the unveiling of the Beast is a sign of the times.
It will also be exposed within us – because manipulation and deceit operate the masking persona with which we are often exclusively identified. Focusing on the errors and evils of others is a way to keep our own hidden. But the irony is that what is hidden is placed beyond the reach of healing – while still being active as ‘shadow power’.

There are so very many environmental catastrophes, but CO2 and other greenhouse gas levels in the atmosphere causing global climate destabilisation may be the worst. I see very little effort being made, in the West, certainly, to do anything about it, and in the more toxic sewers, like the USA and Austfailure, a maniacal drive to make matters even worse, a drive that rejects science, rationality, evidence and any human concern for future generations.
As to vaccines, that controversy is typical of the enforced corporatist Groupthink imposed on Western societies. There are arguments for vaccines, and arguments against, or against the enforced agenda. Are vaccines safe? Are they effective (‘flu vaccines are often risibly ineffective, but the statistics are kept well-hidden). What are the adjuvants used, and why are some ‘commercial in confidence’, that filthy corporatist invention? Should so many be given to infants and small children, in the absence of outbreaks of potentially harmful diseases? But all these questions are simply swept away in a tirade of abuse and diktat, so very typical of the corporatist tyranny we exist under.

The Surgeon generals report on JFK’s death was finally released and said a bullet hit him in the front of the throat just below the Adam’s apple. The bullet left a hole on the windscreen. So we know for a FACT the Warren Comission was a deliberate pile of lies. So why should his brothers murder be belivef. And if the Warren Commission was a deliberate pile of lies forgive me if I chose not to believe the 9/11 commission’s report. Fool me once – shame on you …. fool me twice?

Fool me once – shame on you …. fool me twice shame on me is a profound quote that I wonder if Dubya pointed to while continuing to play the fool and make fools of those who took the bait.
However I wanted to say that the use of intended or effected deceits to identify our lack of vigilance and discernment is the education or impetus to address our responsibility to ourselves.
However, I don’t invest in shame or blame – but responsibility or choice – which is a different meaning than the dumping of hate upon the person of whoever gets to be elected, selected or exposed to sacrifice.
The Greek pharmakoi ~ René Girard
“The Greek pharmakoi, singular pharmakos, refers to victims who were ritually beaten, driven out of cities, and killed, for example, by being forced over the edge of a precipice. The word pharmakos, designating a person who is selected as a ritual victim, is related to pharmakon, which means both “remedy” and “poison,” depending on the context. In the story of the horrible miracle of Apollonius, the beggar is a pharmakos, a kind of ritual victim. Apollonius points to him as the demon causing the plague (he is the source of pollution or poison), but his lynching restores the well being of Ephesus (he becomes the remedy for the crisis). — Trans.”

Then there is also apotheosis.

Or thrice or forever? Agree completely, but what does that tell us of the human psyche? Sapient, it ain’t.

When the rulers lie ALL THE TIME, what is that? A ‘mendocracy’?

Thank you Edward Curtin for fighting back on this issue. It’s time for the State of California to grant a new trial to Sirhan Sirhan. Only that can resolve this issue. So how about it State Appeals Court?

To assert the clear innocence of the patsy, Sirhan, a Palestinian (boo, hiss!) is plainly ‘antisemitic’.