In a major breakthrough for Odessans and their supporters, a United Nations human rights monitoring mission in Ukraine has criticized the Ukrainian government for its failure to investigate and prosecute those responsible for the fascist massacre of May 2, 2014, at that city’s House of Trade Unions.

This doesn’t mean there will be an impartial investigation, but it does help to shine a light on the massacre and the government’s failure to act.

An Associated Press story on the the U.N. report was carried by news media across the United States and beyond, including in The Washington Post, (Minneapolis) Star-Tribune, the (UK) Telegraph and ABC News. This is a major departure from the near-total media whiteout of the issue in U.S. media.

The news story came out on May 2, the fifth anniversary of the massacre, which was also International Day of Solidarity with the People of Odessa, coordinated by the Odessa Solidarity Campaign of the United States and Prague Spring II of Sweden. Solidarity vigils were held in New York City, Vancouver, Stockholm, London, Prague, Wroclaw, Vienna, Budapest and Moscow, among other cities.

Meanwhile, police in Odessa reported that 4,500 people came out for that city’s fifth annual memorial. Among those attending was Joe Lombardo, co-coordinator of the United National Antiwar Coalition and a member of the Advisory Board of the Odessa Solidarity Campaign.

The AP report can be found here.

Their demands were: 50% salary increase, no more vehicles full of manganese driving through the town, better health insurance and healthcare, and better food provided by the company. A small group of workers also started a hunger strike and remained within the center of town in tents, also beginning to sew their mouths shut, one by one, for each day that their demands were not met.

How many times have we been dragged back to Pussy Riot suffering in Russia for their art. Yet those true anti-fascists murdered only 5 years ago in Odessa never get a word in the Guardian?

I remember the Bandera Nazi scum applauding enthusiastically when it was reported that 100 people had been burned to death and clubbed to death by the Brownshirt paramilitary filth trained at NATO bases in Poland and Lithuania with CIA money.

All of course airbrushed out of the lying MSM. “There are no Nazis in Ukraine.”

Most of the flowers and lamps which were placed at the Memorial site on 2 May were stolen or removed by the next morning. The nazi-hooligans are still seemingly untouchable in UA..

Remember what those who took part in the Odessa mass murder look like! 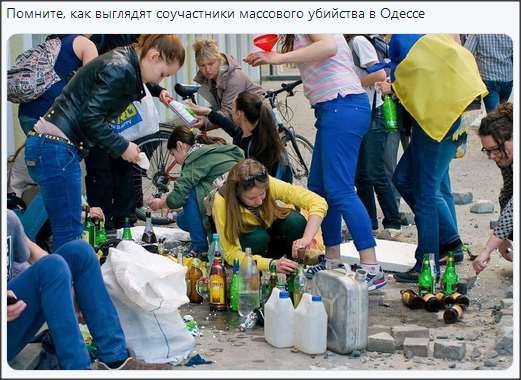 Former Supreme Rada delegate Irina Farion to those who caused the fire:

Bravo, Odessa. Pearl of the Ukrainian Spirit. Homeland of the great nationalists Ivan and Yuri Lyp. Let the devils burn in hell. The best rebels are football fans. Bravo.

The murderers arrived in odessa under the guise of being football fans.

It took me a few moments to realise what the photograph depicts: women caught in the act of murder; blithely preparing molotov cocktails to burn, roast and incinerate innocent flesh and blood.

If we were to look for a 21st century update to the concept of ‘the banality of evil’ then this is the image I would choose.

My thoughts go out to the brave people of Eastern Ukraine who are on the frontline of the fight against the forces of Fascism and reaction.

An event so dastardly that I could only watch the video once. People in the burning building were jumping out of the windows, it was reminiscent of 9/11 in New York. What made it worse was the footage of those who did jump and survive being clubbed to death on the ground. Both the US and EU bear a direct responsibility for this atrocity.

The satanic murders and burning of unarmed people of Odessa on 2 May 2014 and mutilation of their dead bodies will never be forgotten. God will punish the bastards who did this and who supported them. Rest in peace in the Kingdom of Heaven, victims of the bloody Poroshenko regime.

And the victims of the US Obama administration, with EU backing.