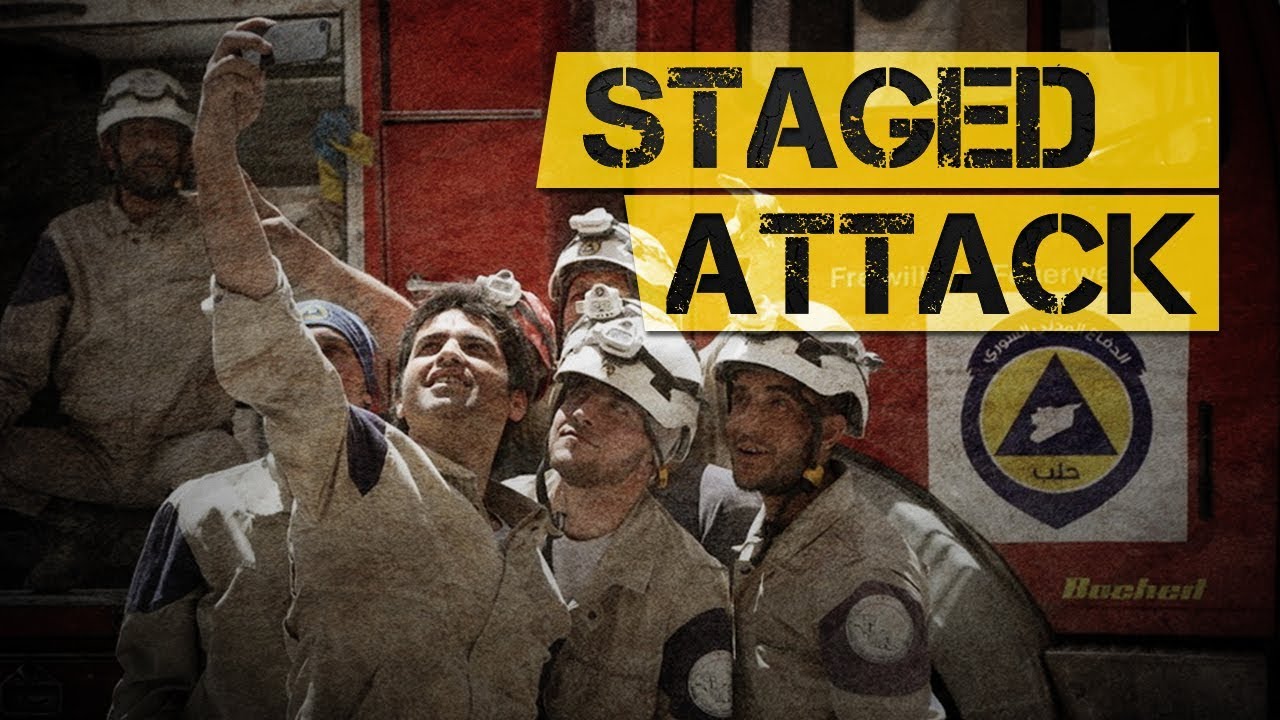 Members of armed opposition groups are preparing to accuse Syrian and Russian military of using chemical weapons in Idlib to hamper an offensive carried out by the Syrian army, SMM Syria has learned from sources in the province.

With this setup the opposition intends to increase international pressure on the Syrian authorities and Latakial the government’s offensive in the provinces of Hama and Lattakia on the borders with Idlib, where the Syrian troops have forced the militants withdraw from a number of areas.

In Hama, since May 8th the Syrian army units have captured Kafr Nabudah, Qalaat Al Madiq, Shaykh Idris, Al Huwayz and the adjacent areas. The ground offensive was preceded by air strikes by Syrian and Russian jets that targeted positions of the armed groups near the aforementioned settlements in addition to suburbs of Khan Shaykhun and Kafr Nabl towns May 5th, 6th and 7th.

At the same time, offensive action in Lattakia met fierce resistance of the militants entrenched in Kabani village who repelled every attempt to advance of the government forces.

The main force confronting the Syrian army is Al-Qaeda’s affiliate Hayat Tahrir Al Sham (formerly Jabhat Al Nusra). Over the past few years HTS managed to establish dominance over the major part of Idlib province and the neighboring areas of Hama, Lattakia and Aleppo.

In addition to HTS, the opposition groups participating in the counteroffensive include Jaysh Al Izza, Jaysh Al Nukhba and other factions under the umbrella of Jabhat Wataniya li-Tahrir (National Liberation Front).

The opposition has already blamed dozens of civilian deaths on the Syrian and Russian military, accusing them of targeting field hospitals with air and artillery strikes.

SMM Syria sources in Idlib reported that the opposition also intends to accuse Syria and Russia of using chemical weapons. Debris of unexploded munitions modified to resemble chemical warheads will be used as evidence of the alleged chemical attack, sources claimed.

A possible explanation for the opposition’s intent to resort to a chemical provocation might be found in dwindling support from its foreign backers. The Western states, most importantly the US, have shut programs for the Syrian opposition armed groups since quite a long time. Turkey, who became the principal backer of the opposition, has also distanced itself from the recent developments and did not intervene against the Syrian army and its allies.

In these circumstances, the only way out for the opposition is recycling the scenario of 2017 Khan Shaykhun chemical attack that was blamed on the Syrian government and provoked a US missile strike on the Syrian military sites. It should be expected that signs of preparation for this very scenario will appear in the coming days.

Editors Note: OffG acknowledges that the author of this article relies on an anonymous source, however given the potential danger of the situation we believe it is important to spread the word on this issue. Given the recent revelations concerning the OPCW, and the dangerous instability of many Western leaders, any false-flag in Syria could easily trigger a wider war of Apocalyptic potential.

Here we go again . . . Assad supposedly determined to do the one thing that would allow the Hegemon to destroy him.

The article mentioned the supposed chemical attack at Khan Sheikhun, but neglected to mention the finding of the UN “Mechanism” (investigative commission.) From page 22 of the report:

“To date the Mechanism has not found specific information confirming whether or not an SAAF Su-22 operating from Al-Shayrat airbase launched an aerial attack against Khan Shaykhun on 4 April 2017.”

Would that be the Su-22 which was capable of time travel?? You know, the one that, according to the UN report itself without elaboration, left the air base at about 7.30 a.m. but – according to rescuers’ testimonies – caused casualties to arrive at hospital at about 6.30 a.m. I may have the precise timings wrong but that was the essence of what the report said. I think it was Seymour Hersh who initially picked up on this blatant inconsistency in the reported events.

He thinks it’s still a bit too soon, and people might get suspicious…
Give it a week or two.

I’m still waiting for a well-educated, articulate and forthright senator or congressperson verbally to slap him down to the subhuman status he so richly deserves.

Hi Mark, Here it is….
13th April 2019
”TWO Saudi oil tankers were hit by a “sabotage attack” off the United Arab Emirates, it was announced this morning – as tensions flare between the US and Iran”.
The ships were struck off the coast of the port of Fujairah – with one of the tankers (allegedly) ‘due’ to be loaded with Saudi crude oil (allegedly) ”bound for America???”

Saudi energy minister Khalid Al-Falih revealed the tankers suffered “significant damage” – although it was unclear what the attack involved.
He said: “Fortunately, the attack didn’t lead to any casualties or oil spill; however, it caused significant damage to the structures of the two vessels.”

– – A huge US naval presence has built up in the Gulf over recent days amid a fevered ”standoff” (WTF?) between Washington and Tehran.

US intelligence revealed Iran was (allegedly) ‘on the verge’ of carrying out offensive action to disrupt and attack American and partner interests in the region.
It led to the deployment of US aircraft carriers, Patriot missiles and B52 bombers over recent days.

You just couldn’t make it up? But Bolton and the goons do.
https://www.thesun.co.uk/news/9060525/saudi-oil-tanker-sabotage-us-iran/#comments
I don’t normally even look at the Sun but it was the first thing that popped up in my search?

14th April 2019
”A U.S. military assessment of explosions that damaged four oil tankers off the coast of the United Arab Emirates were bound for the U.S. reportedly points to Iranian sabotage.
A U.S. official said Monday that the four vessels, two of which were Saudi vessels while the others were Norwegian and Emirate, each had similar five- to ten-foot holes blown in the sides, suggesting that the damage was caused by explosive charges with the intention of sinking the ships, according to The Associated Press.
The official added that the damage was ”thought” to be caused by Iranian military forces or Iranian-backed militias. (and we know what thought did – followed a sh*t cart and thought it was a Wedding.”)
Saudi Arabia’s energy minister, Khalid al-Falih, said Monday that the damage to the ships ”was an act of sabotage.”
(..)
“One of the two vessels was on its way to be loaded with Saudi crude oil from the port of Ras Tanura, to be delivered to Saudi Aramco’s customers in the United States,” he reportedly said. “Fortunately, the attack didn’t lead to any casualties or oil spill; however, it caused significant damage to the structures of the two vessels.”
The U.S. had previously warned of efforts by “Iran or its proxies” to target ships in the region as tensions between the Trump administration and Tehran continue and U.S. sanctions make Iranian oil untouchable for many buyers.
Last week, a carrier strike group and bomber task force were deployed to the Persian Gulf amid “a number of troubling and escalatory indications and warnings,” according to national security adviser John Bolton.
https://thehill.com/policy/defense/443542-initial-us-military-assessment-points-to-iran-in-sabotage-of-oil-tankers

So they already knew what was going down? Hence THEY SENT A CARRIER STRIKE GROUP AND A BOMBER TASK FORCE. How long does it take to sail from America to the Gulf?

While Bolton did not get into specifics, a report from Axios said ISREAL passed the US “information on an ALLEGED Iranian plot to attack” US forces or interests in the region.

The Wall Street Journal cited US officials as saying new intelligence “showed that Iran drew up plans to target U.S. forces in Iraq and possibly Syria, to orchestrate attacks in the Bab el-Mandeb strait near Yemen through proxies and in the Persian Gulf with its own armed drones.”
John Bolton, President Donald Trump’s national security adviser (controller) announced on Sunday that the US would send the USS Abraham Lincoln aircraft carrier and its associated strike group to the waters near Iran to “send a message” and respond to vague threats.
But the US will be sending the powerful carrier to a job it’s arguably ill-suited for, putting thousands of sailors at a major military disadvantage. And ”if” a conflict were to arise, the sinking of a US aircraft carrier would be in Iran’s sights.
Though the carrier’s deployment to Iran’s nearby waters may have been planned long ago… Bolton has been clear that the ship’s return to the region marks a response to “a number of troubling and escalatory incident and warnings” from Iran.
https://www.businessinsider.com/us-sent-iran-an-aircraft-carrier-message-but-its-at-a-disadvantage-2019-5?r=US&IR=T

6th May 2019
Why the US suddenly decided to send an aircraft carrier and bombers to check Iran
https://www.businessinsider.com/why-the-us-is-sending-an-aircraft-carrier-bombers-to-check-iran-2019-5?r=US&IR=T

All this BullShit.. and then we wonder why people remain so ignorant.

Quelle surprise: not. Just in time for the new so-called Investigation and Identification Team (IIT) of the OPCW – with its mandate to assign blame directly to Damascus and Moscow. No need for an investigation: proceed directly to mandatory retaliatory attack.

Prophecy from the crankosphere:
Will be timed to coincide with a further false flag event linking to Iran, probably in empire’s heart (again).
Potassium Iodide tablets, bottled water, a shovel and a mattock needed.

Hitchens mentions the discrediting of OPCW but massively fluffs the issue by referring to “the decision we, France and the USA made in April 2018 to bomb Syria was based on a mistake as big as the fictional weapons of mass destruction in Iraq in 2003.”

For mistake read “blatant cold-hearted lie”, of course. (Link follows, scroll thru the obligatory Brexit bullshit and try to ignore the “finally legal” style imagery on the right)

Apologies for citing this source but the fact that this foetid rag even gets this close to honesty is notable.