Ivan Golunov vs. Julian Assange: A Quest for Journalistic Solidarity 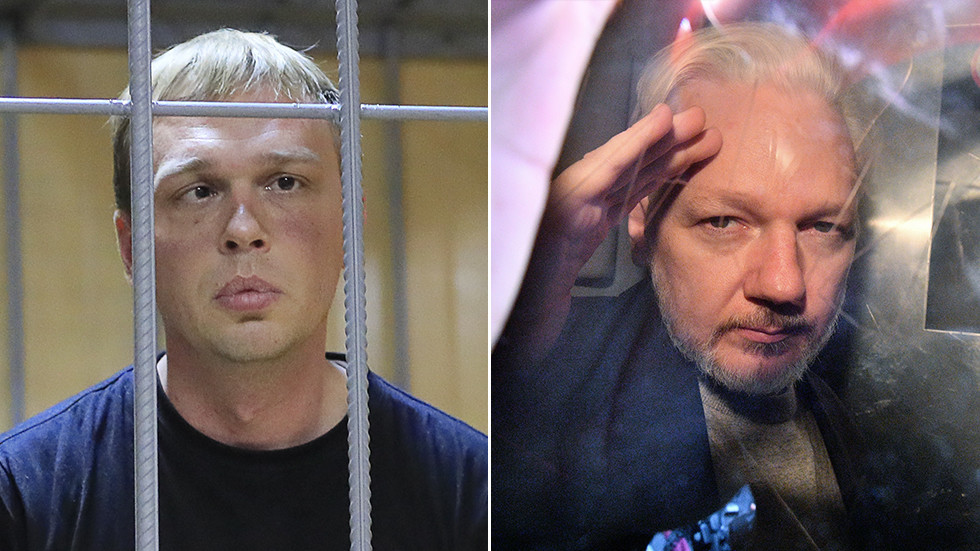 A Russian investigative journalist, Ivan Golunov, who has been writing primarily about corruption within the government, got arrested earlier this month on drug charges in Moscow.

The circumstances of his arrest and the pieces of information released to the public were dubious, to say the least, so the Russian public backlashed at the government. We saw a mass uproar on social media AND the mainstream media (even my apolitical Russian friends have been sending me links related to the story).

Virtually all journalistic community rallied behind him. TV-news personas, such as Irada Zeynalova of NTV (a federal channel that has a reputation of being blatantly pro-government), were making statements on air in end-of-the-week news programs, saying that Golunov’s case is a “test for all of us”.

Multiple marches, both sanctioned and unsanctioned, with people demanding Golunov’s release, were planned for Russia Day and the following weekend.

Regional MVD directors who sanctioned the arrest are now being sacked from their positions.  An investigation is being launched.

Further, Russians are now having a nation-wide debate about the need for the MVD reform, particularly regarding the way the authorities handle drug-related offences.

Interestingly, some of the pro-government publicists who are employed by the state-funded entities such as VGTRK have come out with an official apology, saying that they were wrong to smear him and that they feel ashamed of what they were initially saying about his drug charges.

Ivan Golunov was arrested on June 6.  It took less than a week for the Russian journalistic community to gain enough support for their colleague and to create enough public resonance for the higher authorities to pay attention to the case.  Golunov was released on June 11.

Now, tell me again how all Russian media is state-controlled, and how Western media is free. Does the name Julian Assange ring a bell at all?

There was no outcry in the Western mainstream media when Assange was forcefully dragged out from the Ecuadorian embassy in London in April this year.

In fact, nobody seemed to care that much. The only available footage of his arrest, the footage that the other media outlets have ended up licencing, was shot by RT crew.  No other media outlets were present at the scene when the arrest happened, even though everyone was expecting it to happen for days by then.

There were very few voices in the mainstream media rallying behind Assange. The dominant majority of the coverage ranged from indifferent to outright smear, getting as bad as saying that Assange “got what he deserved“, with the authors trying to convince their audience not to fall for his “phony pleas for sympathy, his megalomania,”> and his “promiscuity with the facts” (sic!).

That says a lot about the current state of the Western mainstream media, doesn’t it?

Going back to Golunov case, there are still a few questions to be answered.  We don’t have all the information at this stage, and there are numerous rumours, speculations and conspiracy theories that you can find in the Russian blogosphere at the moment, suggesting that there are different cliques within the Russian power groups who are trying to compromise each other informationally by setting up such incidents that cause public uproar.

I wouldn’t be able to comment on those as, again, we lack verifiable information, but it is just that the Golunov arrest (he is employed by Meduza, by the way, a Latvian based Russian opposition media outlet funded, among others, by Mikhail Khodorkovsky, a Russian oligarch in exile and a long-time Putin’s antagonist) strangely coincided with the opening of the St. Petersburg International Economic Forum 2019, and it happened exactly two weeks prior Putin’s annual Direct Line Q&A event.  But it could be just a coincidence, and, judging by everything we know so far, it was, indeed, a case of routine corruption within the Russian Internal Affairs Ministry. 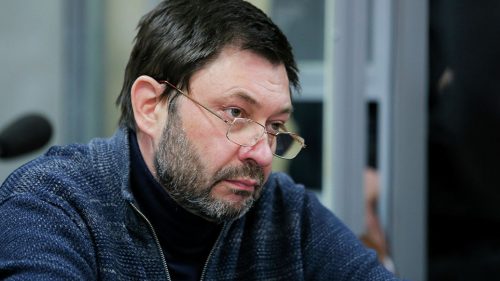 Either way, since the precedent has been set and Golunov is now making international headlines, I advise you to look into the case of Kirill Vyshinsky, a Ukrainian journalist who was working for Russia’s RIA Novosti in Ukraine and who has been in custody in Kiev for over a year now on the charges of…treason. 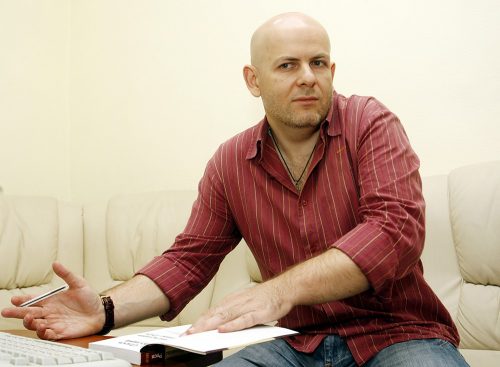 Or maybe you should look into names such as Oles Buzina, a Ukrainian opposition journalist who was murdered in 2015 by two members of the C14 neo-nazi group who still walk free, or Oleg Kalashnikov, or the dozensof other journalists and political activists who have been either assassinated or repressed in Ukraine since the 2014 Euromaidan regime change.

If you get your information exclusively from the Western mainstream media, the chances are that you’ve never heard of those cases, because the current Kiev government is pro-US, so it is okay with the, so-called, “international community”.

Makes a change from shilling for bombing Syria and war with Iran, and smearing Assange and Corbyn.

And they call it ‘the land of the free’ – a country that persecutes its poor, incarcerates them on an operatic scale then profits from the misery this system causes.
Of course news casters on Murdoch’s propaganda platforms are unlikely to draw attention to the fact that more than a fifth of the worlds prison population are languishing in fetid Amercian jails.

Ah, yes, H., but they have to lock up all those young black desperados caught jaywalking.

In a marked revelation of the dire state of the WMSM this fit-up was initially jumped on by them and then when it proved a mirror of their failing to support Assange, they dropped it like a hot potato. This is a well written piece and because of this it is becoming increasingly clear that the old Harding school of fiction is going down the pan – even further at the Guardian..

The other example of Russian freedom of expression [not suppression] was the demonstrations in Ekaterinburg about the building of a new church. Again poorly covered in the WMSM because again it highlighted the freedoms that exist in Russia. Not the usual propaganda Hardinesque tripe.

Unless you are actually in Russia, you don’t know what’s going on. As a foreigner, report anything unfavourable, and they’ll deport you. Russia is a police state. Don’t be naive.

The USA is also a police state; read any of John T Whitehead’s articles for verifiction.

So, you’ve given up trying to support the OP’s original assertion?

The other example of Russian freedom of expression

As anyone knows and who has followed my comments here for the last 4 years I do live in Russia and have worked here and in Eastern Europe for 25 years. So I might have a reasonable view of reality both here and abroad – from experience.

Of course I do understand that people are entitled to their opinion no matter how ill informed and flat earth it might be – and that is why we are here to put the record straight. Against those, who for whatever reason, might wish to threaten, confuse or spread misinformation.

You know the part-time and professional purveyors of horse shit in the MSM and elsewhere.

Motivated by whether you’ll get your next visa, I may understand, but do not admire.

Thing is, you are free to defame the UK/US sat in your underpants, furiously typing conspiracy theories, in you mothers basement. Try that in Russia, and your feet wouldn’t touch.

Sorry, Bill, my dear old mum passed away many years ago.

And I don’t wear underpants.

Russia as the last bastion of press freedom? Do fuck off.

The vilification of Julian Assange by the MSM (lead by the Guardian) has been so egregious apologists like Marina Hyde, James Ball, Hadley Freeman, Luke Harding, Suzanne Moore and Nesrine Malik have been taken to task by the UN rappateur on torture, Nils Melzer.

Melzer says ‘I had been affected by the prejudice that I had absorbed through… public… narratives spread in the media over the years. And only when I scratched the surface a little bit, I saw how little foundation there was to back this up and how much fabrication and manipulation there is in this case.’
And ‘For the record: I never said I considered #JulianAssange “a bad actor” but that, initially, I had been affected by the same misguided smear campaign as everybody else, and only saw the real facts once I investigated in detail’.

There is a withering take-down of the hacks at the Guardian, and Hyde in particular, by Media Lens – an absolutely cracking read.
http://www.medialens.org/index.php/alerts/alert-archive/2019/906-mirthless-laugh-the-persecution-and-torture-of-julian-assange.html

I do not know if it will be of much help to Julian at this stage but at least the credibility of the smearers will find it hard to recover, especially if they are thick-skinned enough to ever again call on readers to assume correct forms of moral outrage toward cultural issues that are important to them.
Put another way those who cheer on the persecution of whistleblowers should be driven as quickly as possible from the public space.

From Cold War 1 to Cold War 2, Russia and the West have swapped places.
We now have Wolyn’s Inverted Totalitarianism in the West, whilst The Soviet empire had fallen apart and Russia embraces the first steps of democracy and freedom. Way to go Russia.

Why? You cannot polish a turd..

Sounds like there is a far more vibrant civil society and free press in Russia than over here.

If there is a future to view the past, we in the USA will be seen one day as the most hypocritical phenomenon to have ever occurred on this planet.

We see it in many places; the US version of democracy is so stale that people no longer aspire to imitate.

Press freedom exists in patches only. Try to find the truth about the German corruption under the Kohl-Regime. Leuna-Minol scandal for instance. My brother would still be alive had we not been robbed through government abuse of power. But nobody dared write about about it.

Political intrigue or should I say corruption at it’s best .