Iran Holds Legislative Polls after A Frenzied Week of Campaigning 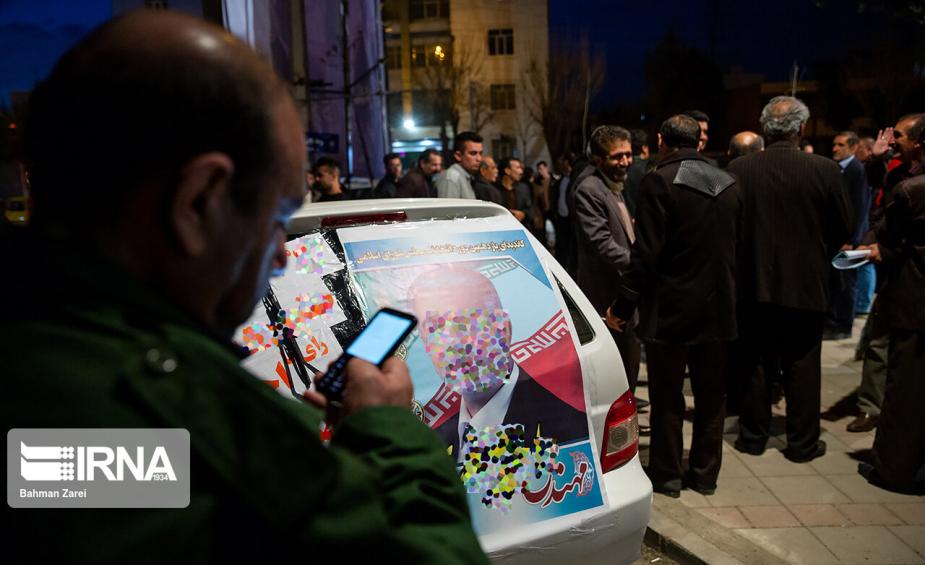 With the campaign season over as of Thursday morning, the countdown to the 11th vote for the Islamic Consultative Assembly has begun. For over a week, candidates were trying hard to appeal to nearly 58 million Iranians who are eligible to cast votes in the country of 83 million.

In a maximum of three or four days, the would-be lawmakers will know if they can hold a seat in the 290-seat parliament for the next four years. According to official figures, 7,148 candidates were eligible to run in the Friday votes, hundreds of which announced withdrawal during the campaigning period.

The Guardian Council, a body in charge of vetting electoral candidates, rejected applications of 7,296 candidates. The council is legally barred from publicizing the reasons for disqualifications, but it appears many were rejected due to legal, financial or moral issues.

Majlis seats are distributed among 207 electoral districts. With 30 seats, Tehran has the largest delegation of any district. Principlists and reformists, the two main camps in Iranian politics, have each released their own lists of candidates.

But many of those included in the lists are unknown to the average citizen. Principlists claim they value youthfulness and reformists say many of notable candidates have been disqualified.

Principlists had initially offered two main lists, one by the Council for Coalition of Revolutionary Forces, an alliance of 11 principlist groups, and another by the Islamic Revolution’s Endurance Front, which consists of conservatives inspired by Shia cleric Ayatollah Mohammad-Taqi Mesbah Yazdi.

The High Council for Reformist Policymaking, the top reformist faction, announced earlier this month it would not publish an official candidates list for the 2020 elections. However, Executives of Construction Party, a pro-reform party which involves the followers of late president Akbar Hashemi Rafsanjani, has published a thirty-member list.

A separate group of eight reformist parties have also released a candidates list, which is highly similar to the other reformist list. The top candidate in both lists is Majid Ansari, a former vice president for parliamentary affairs and the secretary for of the Association of Combatant Clerics.

Mohammad-Hossein Moghimi, a former governor of Tehran, Mostafa Kavakebian, the leader of the Democracy Party, Mohammad-Reza Rahchamani, the secretary-general of National Unity and Cooperation Party and Alireza Mahjoub, the secretary-general for the Worker House are some of prominent candidates included in the two lists.

In previous elections, the reformist bloc and allies of President Hassan Rouhani won 41 percent of the seats, principlists won 29 percent and independents took 28 percent. In Tehran, the List of Hope, an alliance of reformists and backers of the incumbent government, gave a painful blow to rival principlists by securing all 30 seats.

Since the parliament were dominated by principlists for 12 years, the 2016 results could be considered a significant achievement for reformists and their pro-government allies. But it appears unlikely that reformists manage to repeat their victory in the 2016 votes.

The government of Hassan Rouhani, which enjoyed widespread reformist support during the presidential elections, faces serious criticism over economic hardships and a nuclear deal that many believe hardly did any good to Iranians. The US assassination of IRGC Quds Force commander Qassem Soleimani early January was widely seen as another blow to reformists who have long favored engagement with the west.

The turnout stood at 62% for the 2016 race and 64% for the 2012 race. It’s really unclear the polls will see how much voters as Iranians have rarely been predictable when it comes to elections. The disqualification of almost a half of those who registered has met with strong criticism of reformists and pro-government figures, leading to calls for the boycott of elections.

Severe economic problems Iranians are facing could be another factor contributing to a low turnout. But people in villages and small towns would not care that much about national concerns, so the total turnout will not decrease significantly. The second round of elections will be held in May in any of 207 constituencies where no candidate has managed to garner a threshold of 25 percent of the votes.

Exposing the Israeli lie that they are the only democracy in the Middle East. Actually Israel is anything but a democracy since only about 20% of the population are allowed to vote.

Israel is an ethnocracy. An apartheid State for its 20% Arab ‘citizens’ who face at least sixty discriminatory laws and regulations, and the undisguised hatred of many in the Jewish population, particularly the hard Right political forces, and something much, much, worse for the imprisoned Palestinians and illegal immigrants etc. An Evil State, like so many others, but one that we are being ORDERED to worship and NEVER criticise, on pain of retribution.

Democracies also get to choose their electorate, just as Israel has, and ancient Greece, the Old South and many others did. And still do. India springs to mind. Israel is a democracy. Don’t like it? Stop worshipping at the feet of ‘Democracy’; start thinking about the meaning of democracy.

Typo: second emphasis in the wrong place. Should have been on ‘thinking‘.

My understanding is that former President Rafsanjani amassed a huge amount of wealth and property during his time in the job for himself and his family, and current President Rouhani has been pursuing policies inclined towards austerity, so to describe their followers and allies as “reformist” seems a misnomer.

In a country where political power seems to be dispersed among the Supreme Leader, the President, the Islamic Consultative Assembly and various other institutions like the IRGC and the clerical class, I doubt that poor people and people in rural areas – whose needs are catered for by bonyads (non-profit charities and trusts) run by the IRGC and other Islamic institutions and individuals outside the official government system – care much at all for voting in the legislative elections.

The Presidential elections would seem to be more significant to voters than the legislative elections, as would the selection of a new Supreme Leader when Khamenei either dies or retires.

You probably got your CIA merit badge for posting this crap. It’s all talk without evidence such as that they are building nuclear weapons despite actual evidence by the IAEA and NIEs by your own agency.

I certainly would not have thought there was anything suspect in my observation that current Iranian President Hassan Rouhani’s economic policies have made most Iranian people’s lives harder by cutting into social welfare spending and mismanaging the economy and focusing on policies favouring foreign and domestic private investment at the expense of public infrastructure investment.

Faced with a government like that, no wonder most Iranians might have better things to do – like trying to survive thanks to the burdens the Rouhani government has saddled them with – than vote in the legislative elections. They might well prefer to look ahead to the next Presidential elections when they can turf Rouhani and his neoliberal policies out.

Neither did I think I did wrong in suggesting that the former President Ali Akbar Hashemi Rafsanjani might have guilty of nepotism.

Many Iranians take a dim view of the principle of hereditary influence in politics. The clan of ex-President Akbar Hashemi Rafsanjani, who died in January, has in particular become the target of hostility and allegations of corruption – many of them justified, but others probably politically motivated. Three of Rafsanjani’s children, Fatemeh, Faezeh and Mohsen, are themselves active in politics, while the fourth, Mehdi, is a businessman. Convicted of corruption, he is currently serving a long prison sentence.

Some commenters here at Off-Guardian should think and ask questions before shooting their mouths off and making themselves look like fools.

It may well be that the legislative function in the Iranian government is rather less important than the executive function (the President) and perhaps the Iranians rate the presidential elections, due to be held in 2021, after which Rouhani must step down as President because he will have served two terms and cannot serve a third successive term, as more important. Voter turnout in the 2017 Presidential elections was 73%.

What is crap about stating that President Rouhani and his neoliberal policies have been a disaster for Iran?

It appears to follow the Western MSM’s hate propaganda line that totally ignores the murderously vicious and extra-territorial US sanctions regime, and blames the victims instead, a typically Evil and mendacious Western MSM tactic. Neoliberal policies are, as you make clear, anti-human, and the worst response to the sanctions regime possible.

How many postal voters?