BEST OF OFFG: “The Guardian’s Latest Attempts at PR for the Ukraine Nazis” The Guardian accidentally proves themselves wrong.

Republished as part of our ‘Best Of’ series, revisiting some of OffG’s Pre-Covid editorials – either because they help remind us of important realities easily overlooked nowadays, or because they take on added significance in a ‘post-covid’ world.

Any “Best of OffG” section needs to begin with The Guardian and Ukraine – they are the reasons the site exists in the first place.

With those criteria in mind, choosing this one was easy as it encapsulated everything toxic about the Ukraine narrative: NATO support for neo-Nazis, the press covering it up, and the censoring of anybody who pointed it out below the line. The fact it was also an hilarious own goal from the Graun, which required immediate correction, is a bonus.

For over a year The Guardian had been ignoring and/or removing evidence that NATO were backing literal fascists in Ukraine…and they printed a photo of one, standing in front of Nazi symbol…

A profile of the females in the infamous Aidar Battalion appeared on the Graun front page today. Though it didn’t stay there long, being swiftly removed and hidden away in the Ukraine section.

It would be nice to think the reason for this was some sort of residual shame on the part of a one-time great liberal newspaper, being suddenly less than comfortable doing PR photo features on Neo-Nazi chic. It would be great to think that they were not happy showing sympathetic pix of white supremacist Hitler-fans, even if they did have bewbs.

But no. The one and only reason the Guardian moved this shameful “Hello” magazine parody from their main page was the hurricane of condemnation it received in the comments.

Yes, it was once again left to the much-maligned heroes of CiF to uphold the ethical and intellectual traditions of the Guardian, and remind the editors that – even after 12 months of almost North Korean style hardcore brainwashing about the “heroes of Kiev” – people in the west are just not ready for Nice Nazis. And as usual it was in CiF that we found the kind of full-spectrum ethical “journalism” that once flourished above the line.

A user called SneakyPeete was particularly trenchant and eloquent about the undisclosed agenda on display ATL: 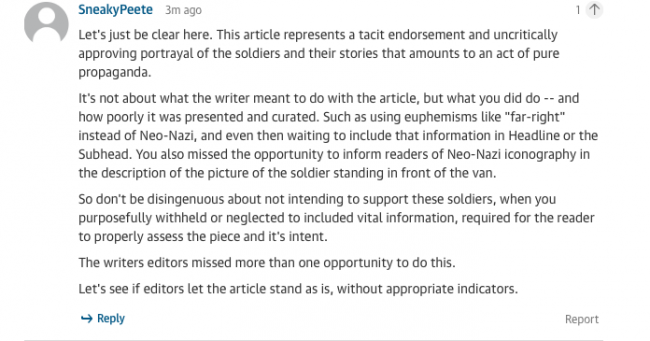 But the Guardian didn’t think this particular comment deserved to be free, and canned it:

In fact the Guardian editors responded to the flood of condemnation in the usual way – by scything through the comment section with Stalinist aggression and Orwellian agenda. Mention the word “nazi” in conjunction with the Aidar Chicks and your comment would disappear before the ink was even dry.

A user called Bananasandsocks pointed this out… 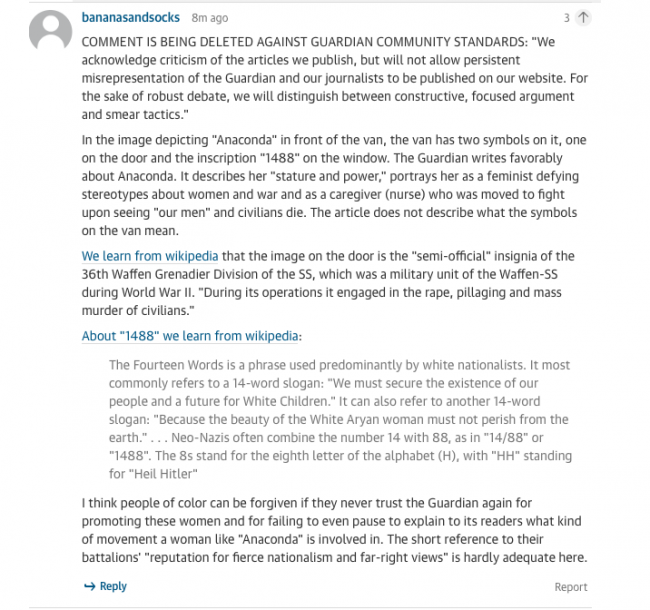 But not for long…

If you want to know what the establishment doesn’t want discussed in public on any one day – visit the Guardian BTL and check out what facts are being regularly scrubbed.

Today, in this article, it was the numbers on this van… 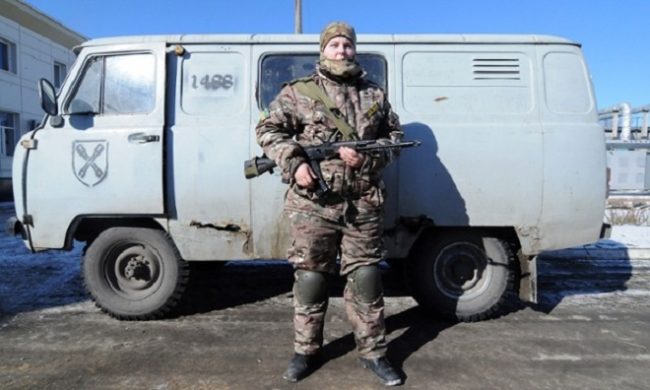 …and what they mean…
http://en.wikipedia.org/wiki/Fourteen_Words

For some reason, even mentioning the fact that the “1488” scrawled on the van in that pic was a pro-Hitler, pro-white power slogan could get your comment deleted in seconds. Happily, this only resulted in more and more CiFers posting and re-posting the link. Hopefully some of these may even have survived the cull.

It’d be nice if this article and the policy behind it were a one-off. We all know it isn’t. The “normalising of the unthinkable” is the prevailing campaign in western media. Nazis are being divested of their untouchable status and repackaged as freedom fighters. Our governments are sending US and UK troops to train these Hitler-worshippers to kill their fellow Ukrainians.

And the Guardian, flagship of the liberal left, has nothing to say about that at all.

UPDATE March 12: According to this site, the Guardian has done another of its Orwellian “silent revisions” with this article. The above pic of the charming lady and her van was originally captioned:

Anaconda says she is being treated well by the men in her battalion, but is hoping that the war will end soon.

But has now been seamlessly amended to read:

Anaconda alongside a van displaying the neo-Nazi symbol 1488. The volunteer brigade is known for its far-right links.

So, maybe all those censored opinions and banned contributors actually forced a change above the line? Will they now reinstate all the comments that were deleted for simply saying the very thing they belatedly admit to be true?

Comments are now open as usual. Thank you.