This Christmas in the New Normal

This week is our special Christmas edition of This Week, where we pull out just the whackiest headlines we can find, take a step back, and laugh at just what a clown world we’re all suddenly living in. 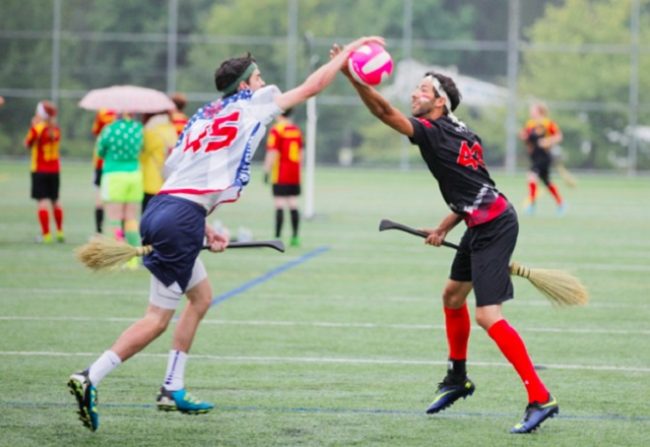 For those of you who don’t know, Quidditch is a sport. Not a real sport, a made up sport from the Harry Potter stories, in which Wizards chase magical flying balls on magical flying broomsticks.

“Real world” Quidditch leagues have existed for a long time now. However, since Harry Potter didn’t actually happen, and that curiously simple brand of magic has not yet been shown to exist, neither the balls nor the broomsticks fly.

Instead, 14 people run around a muddy field holding broomsticks, usually between their legs. The only real resemblance to fictional sport is the name…and now they’re going to change that.

Yes, in protest at JK Rowling’s “transphobic” belief that people born with XY chromosomes are men and XX chromosomes are women, various Quidditch leagues around the world are changing their names.

Well, partly the trans rights thing, and partly that they are trying to avoid getting sued over copyright issues. Mostly the first one. Honest.

The point is, it will still very much be the same sport as in the books. Just with different rules, and no magic…and now a different name.

Some might argue that continuing to play, and profit from, a “sport” whose inventor you refuse to acknowledge is somewhat strange. But then so is running around with a broom between your legs, pretending you can fly. 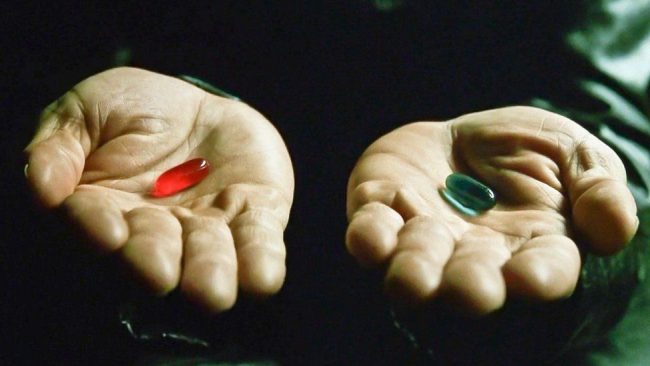 There’s no question the Matrix is one of the most influential films ever made. Its cultural legacy is far more than just slow-mo action and every movie for the next ten years having black latex in it. It birthed several phrases of cultural significance, including “glitch in the matrix“, and most prominently “taking the red pill”.

The phrase is ubiquitous enough you likely don’t need me to explain it. In brief, “taking the red pill” means to discover a deeper agenda, or uncomfortable truth, whereas “taking the bluepill” means to choose to embrace a comforting illusion.

It’s so ingrained in the collective mind that “to redpill” has simply become a verb…and now they want to change that.

The Matrix Resurrections just came out, a long-awaited sequel to the original Matrix trilogy, and the screenwriters have said one of their main aims in the film was to “reclaim” the redpill meme since it has been co-opted by “the far right”:

Things like the Red Pill/Blue Pill trope or meme and how it was kidnapped by the right-wing. The verb “to red pill” and so on. So one thing we were mindful of is how to reclaim that trope. To renew the meaning of Red Pill/Blue Pill.

There’s been a lot of talk about that, at least five separate articles discuss it. A long piece in Vanity Fair claims that the “red pill” has been misinterpreted by antivaxxers and QAnon, and that the message of challenging your assumptions and questioning authority was never really in the text in the way its been interpreted.

Obviously, the idea we should question authority, and the base assumptions of our world and system, shouldn’t ever be applied to our politics, and certainly not vaccinations or the influence of Big Pharma. That’s just “far right” talk from people who “willfully misunderstood” the original movie.

Of course, they don’t mean the real “far right”, as in the fascists taking over the governments of most of the world, they mean people on the internet – like us – who oppose the mainstream. “Far right” has just become the standard media-speak for anything outside the establishment.

How you “reclaim” a meme, and why you would make a 200 million dollar movie just for that purpose, I do not know. I’m 100% certain it won’t work though.

We all remember the “dancing nurses”, the tone-deaf attempts to increase morale allegedly from healthcare workers who were being worked almost to death by the “pandemic”. The increasingly intricate and bizarre routines are one of the oddest things to come out of the Covid years…and Joe Biden just commissioned a new one for the White House.

Yes, POTUS and Mrs POTUS invited nurses to sing and dance at the East Room of the White House for Christmas, and it was just exactly as odd as you’d expect it to be…

NEW – Joe and Jill Biden invited singing and dancing nurses to perform at the White House, similar to the countless videos shared on the Chinese app TikTok.pic.twitter.com/8BcOz6F0ur

It’s beginning to look a lot like fascism: OffG’s pick for this year’s Christmas number 1…

Football fans tell it like it is: A large number of Scottish football fans appear to be unhappy with Nicola Sturgeon’s vaccine policies, and let her know it in classically Scottish fashion:

🏴󠁧󠁢󠁳󠁣󠁴󠁿 Scotland football fans have their say on the booster

The Christmas Spirit Lives On

In Finland people are required to have a vaccine passport to go to church, as such many find themselves banned from Christmas services all over the country. Their response is perfect, gathering crowd outside the half-empty churches, and singing their own carols:

A perfect, peaceful way to quite literally make your voices heard.

All in all a very busy holiday season, and we didn’t even have time for Scotland pardoning all the people they executed as witches (which is a relief to them, I’m sure), how Jesus wants us to get vaccinated, or the BBC’s handy guide on how to talk to conspiracy theorists over Christmas dinner.

Merry Christmas everybody, and see you all in the new year.

The Wachoskis took the blue pill https://grahamlinehan.substack.com/p/from-the-memory-hole-rolling-stones, became ‘women’ and are now celebrated in the top ten women directors. What’s there not to like? What illusion?

Saying Biology matters makes one transphobic? She’s not, read her letter. Get on with that delusionary kneejerk crap. No debate doesn’t work anymore, not with covid, not with sex.

just curious… do you wear knickers or underpants? or is it more of a unisex thing?…

I hope the new normal will go well in the new year. Dec not let Corona increase again, so that everyone can get together with the people they love.
https://www.basketballlegends.club

Leaked files obtained by The Grayzone indicate that the Royal Institution has enlisted the services of Valent Projects, a “social change” communications firm founded by a public relations operative previously involved in the UK Foreign Office’s campaign for violent regime change in Syria. Valent has also been sponsored by the US Agency for International Development (USAID), a US intelligence cut-out, for a project aimed at “investigating disinformation.”

A dose of madness from Switzerland…

“Contracting Covid-19 on purpose to gain natural immunity is a potentially criminal offense that could lead to a lengthy prison term, Switzerland’s Federal Office of Public Health said in response to the rise of infection parties.”

We had our xmas dinner in a cafe in a village in South France, no masks and no pass sanitaires. An excellant evening was had by all!

I’ve tripled my monthly donation in wake of Patreon’s treachery.
Thanks for everything.
Felix Natalis Solis Invicti to the entire staff,

“The reason why Christmas came to be celebrated on December 25 remains uncertain, but most probably the reason is that early Christians wished the date to coincide with the pagan Roman festival marking the ‘birthday of the unconquered sun’ (natalis solis invicti); this festival celebrated the winter solstice, when the days begin to lengthen and the sun begins to climb higher in the sky.”

Birthday of the Unconquered Sun

Oceania has never been at war with Eurasia

Keep up why can’t you

Have a good one all!