Keith Knight of Don’t Tread on Anyone joins James Corbett to discuss The Voluntaryist Handbook. You can download a free PDF of the book here, or buy a hard copy here.

The lyrics to ‘We appreciate power’ by that woman he had a child with are, er, interesting….
That’s right

How does this even exist without even a single reference made to Larken Rose?
Even in the comments? Controlled opposition?

This article is a good example of how one explains the world while pretending that the Enclosures never happened and haven’t continued taking place since starting.

Oh, grief. Not this again! Listen, the gov’t is not our gov’t. It’s the rich capitalist’s gov’t. If the government were the People’s gov’t WE would be defining Policy & Budget with our participation, design and consent or rejection. Just as the Federalists believed democracy = “mob rule”, so too does the ruling elite since Plato. And as long as they can keep the illusion alive among the 99% that they have our consent via a portrayal of the vote as valid, this will never change. 75% of eligible voters do not vote in all but the extremes of Presidential election or an Initiative vote. When this 75% realize they are a ruling majority and can gather together the 99% to collectively self-govern in a Direct Democracy using 21st C technologies already in place, we can start having a true egalitarian civilization.

2500 years of human history has taught us that when individuals are given authority-to-decide, the wealthy control those individuals. To control this apparatus, WE the People need to be the only entity with authority-to-decide so we can make Policy & Budget decisions that create the greatest egalitarian conditions for human society. The idea that only “volunteerism” and the freedom to give whatever they feel, is the most appropriate arrangement to fund collective services needed by everyone, does not bear out to history. The 1%, with half the US wealth and 99% of it’s disposable income, call this “charity” and it’s pure chump change PR’ed into popularity advertising. The largest portion of their “volunteerism” is spent controlling THEIR “elected” deciders to make Policy & Budget that makes them incrementally ever richer and more powerful, better called the authority-to-decide.

This “volunteerism” business, ‘leave us alone and we’ll sufficiently contribute’, is identical to the rhetoric of those who defend “capitalism” by saying that the current capitalism is not capitalism and only pure capitalism, which THEY supposedly are functioning as, is one in which it is not “corporate” capitalism, or subsidized capitalism or given extra privilege capitalism. This thinking is naive, ignorant and magical thinking. It trusts the 1% (500k/yr+) to do the right thing, but does not trust the 99% to be collectively intelligent and conscientious enough to do the right thing. Bullshit.

We can voluntarily get together and decide limits to poverty and wealth so there are no extreme dehumanized losers (like homeless) or ruthless winners (like rothchilds). We can decide to expand Constitutional rights so the basic sovereignty, the God given rights of each human is protected from over zealous Policy, like forced masking or vaxxs or disallowing personal choice or actually any forced behavior that is not physically violent to other humans. It is possible to protect basic human rights to behavioral freedoms that Libertarians want without forgoing limits to poverty & wealth. Contrary to the libertarian rap, this issue is all about INCOME & WEALTH, not about personal freedoms. Unlimited Income & wealth has proven itself fatal to the success of a human occupancy and proper maintenance of Earth as a location of sentient life in the Universe. We can do this right with limits to poverty and wealth. Like 1x, 50k, at bottom and 5x, 250k at top AFTER TAXES. We need to stop taxing the earned income of labor and tax the unearned income of landlords and the rich.

You seem obsessed with MONEY. Let it go

“The love of money is the root of all evil”.
I don’t think we should let the money lovers off so lightly, Carlos.

“When”, “if”, “we”. Some big assumptions on the road to nirvana. Your ideas are good, although not yours, they’ve been around as I’m sure you know since, like Plato, the question is how to have a “come to Jesus moment” on the planet, i.e., how are we going to force a democratic global discussion on how to live together on this planet from this point forward. I know some people who are not going to allow that, and I know a whole lot more that don’t even know what it fucking means.

We? We. That’s the problem. Because WE’ve listened to THEIR bullshit that we are not WE, we are THEIR serfs, powerless to THEIR authority, WE have no sense of WE. When we know WE have the authority to rule ourselves without their bullshit, we can self rule. Not till. Then WE can use all the ideas that come right out of tribal peoples self-rule, way before Plato, with the modern tools we have now. These fkrs have no authority (power) if we don’t give it to them.

The fact that you call it “volunteerism” shows that didn’t watch the interview, don’t understand what voluntaryism is and certainly haven’t read the book. Maybe take a look just to make sure you know what you’re arguing against?

This refers to the “government” or the “state” as if it were divorced from them, us, the People. If we think of government, governing as divorced from ourselves then we will never self-govern. The existing system is oligarchy sold to us as republic. Representative government has proven itself a prop for oligarchy. Libertarians do not believe in collective intelligence or competence to self organize and self rule from what I have read. This 21st C world is way too complex, built up and over-occupied to dissolve infrastructure maintenance required to sustain life support. The only option is collective cooperation to self-determine our future. We can do this no matter what any ism tells us.

Can I get the e mail address of the author, to have potentially exchange my views

Maybe it’s time to put “Controlled Opposition” on hiatus. While undoubtedly it’s a valid concept, it needs a holiday; it’s being worked to death.

Let’s be realistic: everything seen or heard or read on any part of the media is potentially “Controlled Opposition.” One can even make the claim that TPTB are so powerful that nothing can ever appear on any media without their approval.

Doesn’t this play right into the one absolutely overriding thing these “powers that be” so desperately want to become inured in the collective human consciousness: that NOTHING can be trusted or believed?

It’s rather like a Court case where every single word uttered by either the plaintiff or defendant can be objected to on the ground that no one can ever know if it’s true.

I agree with you. But I still think Alex Jones is controlled opposition.

I’ve thought that about Mr. Jones for years – ever since his 9/11 documentary “Terrorstorm.” To me, Alex Jones is where ideas are sent to be fitted with tin foil hats.

Yep, we should get rid of all government and let private corporations run the world. Oh wait, never mind.

Voluntaryism is the prerogative of those whose Maslow needs have already been significantly satisfied.

It also assumes that everyone is sufficiently educated, knowledgeable and full of sufficient wisdom to take the right decisions without them being imposed.

If you have the US military deciding to bomb your country, voluntaryism doesn’t get you too far. So it’s really also the prerogative of those living in societies capable of repelling all boarders…..

I can tell you from bitter experience that convincing people to do the right thing very, very often doesn’t happen. Greed comes first, so does bullying, so does status and so does sadism. It requires others to have a real conscience, which is not an assumption you should always take as read.

For voluntaryism to have significance in politics, you need a very large proportion of the ordinary voters to sign up to it.

It’s a good philosophy to aspire to, but may not always be the right one for practical engagement.

I have found greed, egotism and psychopathy to exist mainly at the two extremes of the power pyramid: At the very top and at the very bottom. Both were engendered by dysfunctional family dynamics.

The former because this centuries old inbred caste is inured to anything outside their entitled cult, the latter because they struggle to provide even the most basic of needs and have only ever known lack and insecurity.

Fix these anomalies – remove the 1% from this earth – yes, I mean that – and finally address the injustices done to the poverty class, and there will be heaven on earth.

My previous comment is locked in the pending tag, again. Becoming the norm on here.
There wasn’t anything in my post that is legally censorable; just an opinion about Corbett.
So, the next step is to trip the system into giving away whether its me being automatically censored, or if its words I use. None of which call, or will ever call, for extreme hostility.

Is this site run by Corbett or something? Sure have a lot of sales pitches for him. I’ll never buy his stuff because I think he’s controlled opposition, which would be why he’s promoted instead of censored like the rest of us.
The difference,of course, being that our concerns are of the type that gets in the way, while Corbett’s are the type that clear the way.

Its not always what the controlled opposition is saying, sometimes its what they aren’t saying. Case in point, they never mention that the patents are literally designed to destroy the immune system, cross the blood brain barrier and install carbon nanotubes. But hey, why not make a few bucks while you distract and mislead the masses; nothing is more refined.
Just ramble on about circular arguments and rehashed tag lines from the past 2 years and the masses will think you’re on their side. They never realize that the conversation never advances with controlled opposition; always stuck on the same subjects while avoiding the important things.

Is this site run by Corbett or something? Sure have a lot of sales pitches for him.

wise – The cost of living is expensive in Japan!

I kind of liked Corbett and was interested in a video he made a few years ago when he said Adolf Hitler was an illegitimate Rothschild/ Schicklgruber, He assured us it was true and he would post the links at the bottom of the page…….honest! Suffice to say he didn’t.

He used to hang around with one trick pony Sibel Edmonds until she turned on Putin so i assume he dropped her as he would have lost a huge part of his then audience. You could see he was very uncomfortable when she unloaded on him.
Shes now milked Gladio B for all its worth and said farewll.

Chum, Its like an AH Time magazine permanently on display while out shopping to prick Swaz the public. 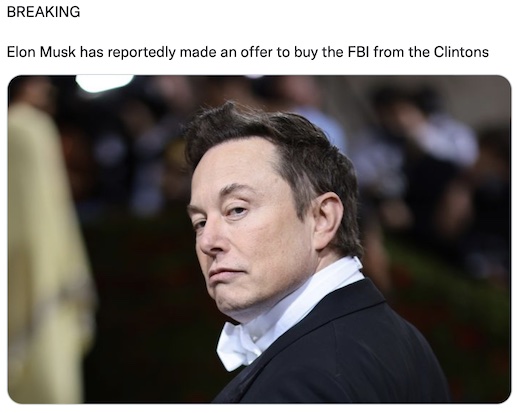 The lyrics to ‘We appreciate power’ by that woman he had a child with are, er, interesting….

WOW! That song got my wheels spinning for sure. t’s like West World and Blade Runner were showing us who we are and some are indeed breaking out of their programming to realize that this place is full of LIES and fake. “Biology is superficial; intelligence is artificial.”

A pink and green thing living on Neptune has reportedly made an offer to buy Elon Musk.