We all know that torture is bad, but are we really aware of how much of the narrative of the past two decades was constructed on torture testimony? Do we know the CIA contractors who developed the torture program or the steps that the intelligence agencies took to cover up their illegal activities?

And, when we connect the dots, are we prepared to face the parallels between the torture regime and the biosecurity regime? If you haven’t followed the twists and turns in the torture story since my 2008 podcast on the subject, buckle up. It’s going to be a wild ride.

Links, sources and download options – as well as the audio-only version – are available here.

I trot out this statistic about a hundred times a year. An ABC poll (yes, I know: polls are anything but reliable) – in November of 2001 – resulted in 40% saying torture was sometimes justified.

To me, that’s right up there with 40% of my fellow Americans saying killing babies or raping children was “sometimes justified.”

So Toby Young of the Daily Sceptic has played a role in the dramatic and maybe some kind of controlled demolition of PayPal. This all happens right at the same time as Brendon O Connell releases a great broadcast stating how the system will be thus – the smaller banking houses will be dissolved (notice how all the High Street banks are shutting up shop and becoming digitised non entities) and the public will effectively start dealing direct with the central banks who will issue the programmable money CBDCs and laugh in your face as they erase thousands of years of cash freedom, replaced with their dystopian controlled money system so they can continue on their mission to turn the human race into Tamagochi cyberpets. I don’t think Toby is at the level where he would be privy to such plans, but all the world’s a stage and using someone like him to help trigger the chain of events we saw is a classic example of how the system really works and is manipulated by those pulling the strings from the shadows. The best actors are those who don’t know they are in a role but who naturally fulfil pre-determined objectives in choreographed scenes from Planet Communitarianism – the Communism and Fascism hybrid model these scumbags have got teed up for us and which is well underway in its implementation.

In order to bring in their new economic system they need to destroy the old one. Is this an example of how they do it, in a seemingly natural yet manufactured chains of events? I am speculating here, trying to make sense of seemingly mad behaviour from multi billion dollar world leading finance houses

So Toby gets his accounts shut down, PayPal close three of his all at once and it throws him into a frenzy, his recurring income has just been screwed up and his business in on the ropes. It’s all so unfair and unreasonable, like a scence from Bez’s Unfair Ground Clown Show at Glastonbury. He takes the bait and starts telling his readers to boycott PayPal. After all, PayPal is now the enemy of free speech and he is head of the Fee Speech Union (typing error but perfect for Toby as he charges money to exercise free speech on his website). So loads of people jump on the bandwagon, and Toby is a successful wealthy well connected guy so some of these will no doubt be quite high value accounts for PayPal. Then a bunch of bankster controlled Tories like Rees Mogg start wading in with their ten pence worth to back Toby and legislate against such abuses, having just led a full on 2 plus year all out assault on free speech and freedom generally, suddenly they care about free speech and start to make very public noises about how nasty naughty PayPal are hurting free speech and rights with their new code. Aww, diddums, see they’re ok really (NOT).

Then PayPal shows that it has either completely lost its mind, which I don’t believe financial institutions generally do, or it is deliberately trying to hurt itself. It then announces that it is going to start auto-stealing £2.5k from anyone who deviates from its hardcore anti free speech policy. Literally says out in the open that it intends to steal money from its customers for no legit nor legal reason, which would presumably be a criminal act, at least in a sane world. Naturally folk start to boycott PayPal en masse and the Daily Sceptic is running articles about how PayPal is down and bringing up error messages to those trying to close accounts and instructions of how to close your PayPal account etc.

So is this a natural chain of events, or are we seeing another stage managed collapse which is being brought about to serve a higher agenda, involving the openly touted desire for these banker criminals who run our government and world to bring in their dystopian new money system that no right minded person would ever sign up for.

Here is the must watch Brendon O Connell broadcast, He is on his last YT strike so his channel might be deleted soon. Use and download it before its gone, his info is crucial to understand light years ahead of the rest of the online alt media types and has been for many years.

thanks he disappeared off the face of the earth

Anyone who believes that the USA, the banksters flagship, is anything but that cannot be taken seriously.

His line is that as the most dominant military power, the USA, needs to free itself from the grips of the Banksters and the Israel Lobby, understand that it is infiltrated and occupied by hardcore Communists like Henry Kissinger following decades of Soviet era style infiltration via Israel (I think we need to have this conversation in the UK as well – are a bunch of Kissinger associated Trotskyite Communist Existentialists as exposed by Kay Griggs on YouTube working in the UK government against our interests, for example, as Kay says they are in the US? It’s a fair question and might go some way towards explaining how our country is being systematically destroyed), stand on its constitution and uphold the values of true freedom around the world, in line with the US Constitution. I don’t want to live in a world led by Israel, Germany, Russia and China aka ALL OUT COMMUNIST DOMINATION with a Fascism cherry on top. No thanks. Israel, as Brendon has exposed, has been a home from home for Soviets and Russians from day dot. Israel has been the vehicle by which the US has been penetrated and its technology assets gleaned. There are efforts being made to bring the US down, with the complicity of bad actors high up in the US Government. In the 1980s YURI BEZMENOV GAVE A CLEAR WARNING THAT THIS IS WHAT THEY WERE UP TO. The UK is also being brought down. The whole of the West is to be harmonised with the THIRD WORLD into the SATANIC ONE WORLD GOVERNMENT SYSTEM aka UN AGENDA 2030 and they plan to have us living in the UN SMART CITIES gulag model, which means destroying our way of life, so we had better start asking the right questions because these operators are stealing our freedom and gaining ground at a rapid rate, as they did post 9/11 with all the new tyrannical anti terror laws and their immoral illegal illegitimate War Of Terror which led to the UK completely trashing any good reputation it had in the world. This was their first turbo charged assault on our way of life and freedom – and barely anyone in the West complained – those who did were closed down and castigated.

They are planning for GLOBAL POLITY which equals ONE WORLD GOVERNMENT aka WORLD COMMUNISM aka COMMUNITARIANISM a la UN AGENDA 2030 which is literally WORLD COMMUNISM.

They hate us for our freedom, as they told us in their post 9/11 brainwashing rituals:

Hello Mucho: Yes. But how did the modern Bankster class originate?

I sometimes disagree with Webster Tarpley’s interpretations of historic events, but he rather connects some dots during this dialog. >

The series ’24’ (first season 2001 – what a coincidence) was so successful in persuading a generation of Americans that torture was justified that the Pentagon asked the producers to tone it down a bit because it was giving them a bad name.

The series starred Kiefer Sutherland, son of beloved hippie Donald Sutherland and it also featured another ex-hippie Dennis Hopper. Have we worked out yet these people are not what they pretend to be? It was made by Fox (666 encode) who are now supposedly everyone’s source of news that challenges the deep state.

P.S. A Dutch politician accused one of the government of being a spy for British intelligence prompting a cabinet walkout:
https://www.dutchnews.nl/news/2022/09/kaag-brands-baudet-extremist-after-spy-college-tirade-derails-budget-debate/
He’s probably a stooge playing the hissable baddie in a pantomime but it is quite amusing. Youtube keep deleting any uploads of the speech with English subtitles although there is a past speech where he accused the Agriculture Minister of being the “assassin” of Dutch agriculture on there (the Speaker gets very upset – about the word, not the government policy. It’s a good example of how the British Parliamentary model defuses anger whether genuine or synthetic).

Re: Hopper, who could forget this passage from Dave McGowan’s Weird Scenes Inside the Canyon?:

For those who may be unfamiliar with Hopper’s body of work, he is the guy who was once found wandering naked and bewildered in a Mexican forest. And the guy who, after divorcing Hayward in 1969, married Michelle Phillips on Halloween day, 1970, only to have her file for divorce just eight days later claiming that Hopper had kept her handcuffed and imprisoned for a week while making “unnatural sexual demands.”

Without passing judgment here, I think it’s fair to say that Michelle Phillips has been around the block a time or two, if you catch my drift, so if even she thought Hopper’s demands were a bit over the top, then one can only wonder just how “unnatural” they might have been. For what it’s worth, Hopper just recently told a journalist that he “didn’t handcuff her, [he] just punched her out!” In his mind, apparently, that makes him somewhat less of an asshole.

All of which may suggest that when Hopper appeared in Blue Velvet he wasn’t acting!

They are not torturing the truth, the truth can’t be tortured. They’re torturing people with falsehoods.

It seems that many people like being tortured as they masochistically cling along to all sorts of falsehoods, most relevant in this case: the jab.

More proof the bugger is a shill.

Damn ! So even Seymour Hersh, who’s investigative reports have informed me over the decades, reported from ‘fantasyland’ about Ossie bin Liner’s capture…You havent left me many to believe in, James ! William Casey is winning !! 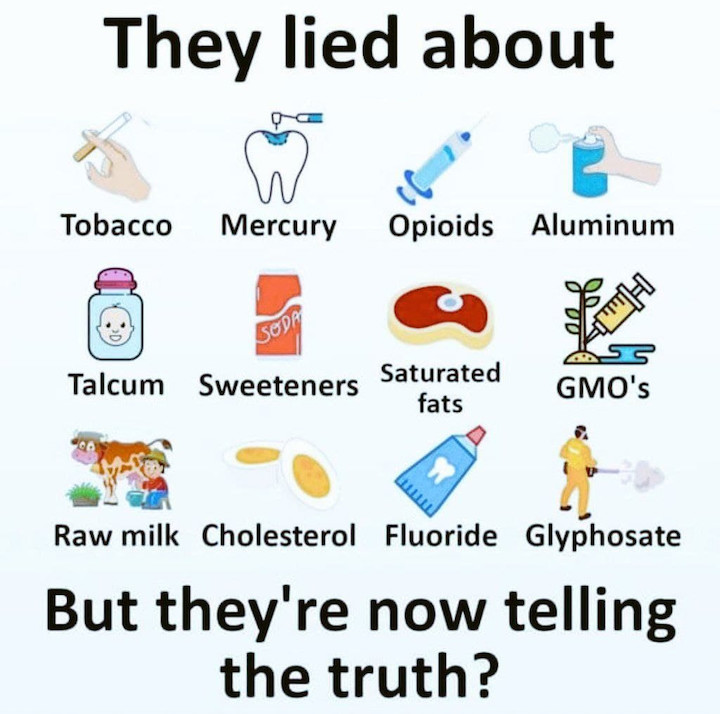 You forgot asbestos,alcohol and a lot more.

We can be sure that the ruling psychos get some kind of sexual frisson from fear mongering.
Something to be smug about as they sift through their investment portfolios.
Consoling to know they’re all gonna die, just like the rest of us.
“Why can’t I buy immortality!!”
they whimper on their death beds.

For the record, Putin didn’t threaten to use nuclear weapons. Nor did Zelensky call upon NATO to use them. Both were skillful examples of Torturing the Truth: