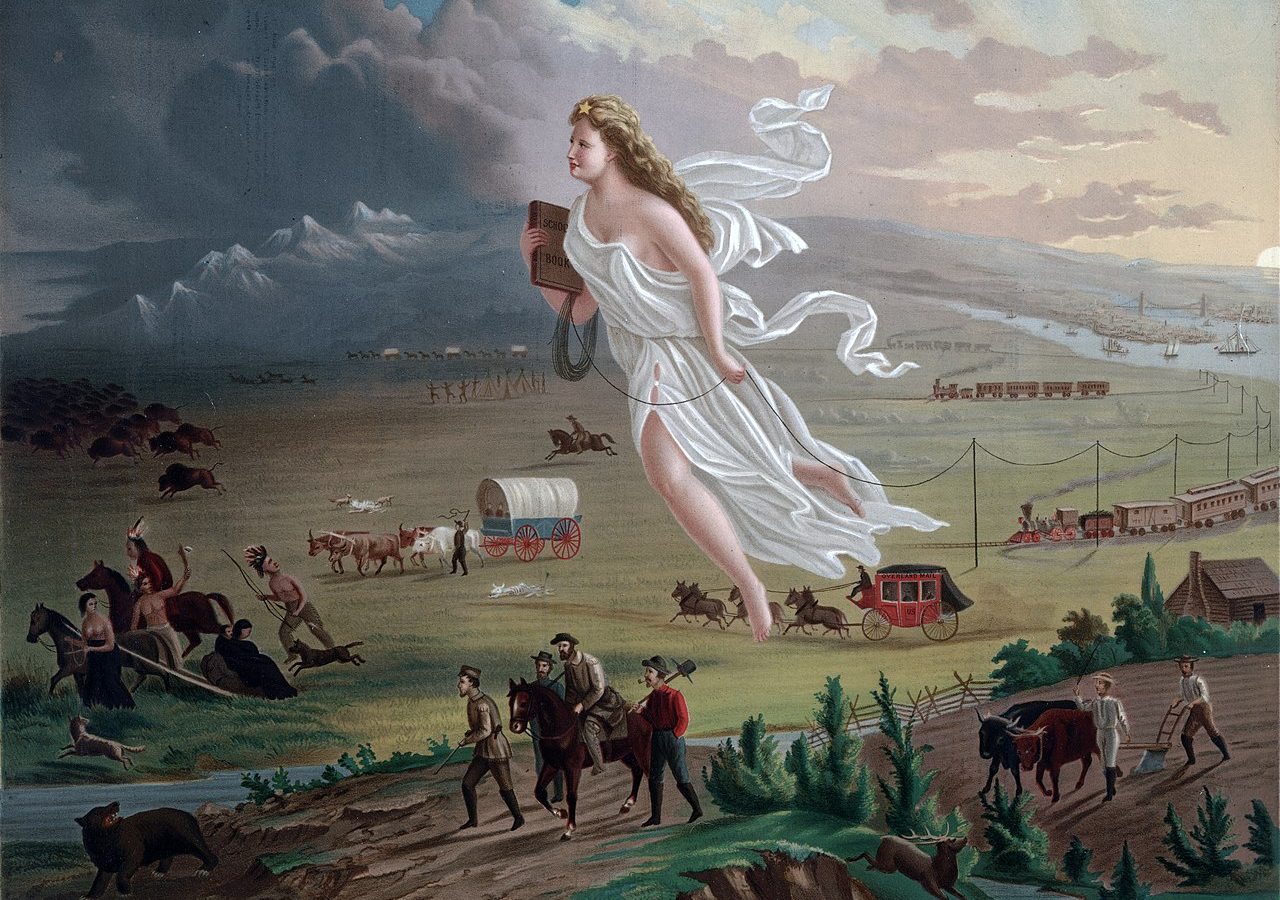 Roberto Sirvent and Danny Haiphong have explored the albatross of myths, legends, lies and damn lies around America’s neck in their book American Exceptionalism and American Innocence: A People’s History of Fake News—From the Revolutionary War to the War on Terror.

They look into America’s closet of historical secrets and expose them. They knock down the stuff that is just made up. The authors explain why the US habitually denies its own bad behaviour, and projects it onto others.

Over the centuries the US has developed an illusion of grandeur. It imagines itself as indispensable and exceptional, unlike any nation that has ever existed. Exceptionalism means not having to say you are sorry or pay for your mistakes. Being exceptional means you are the law. You are the policeman, the judge, the jury and the executioner.

To enforce its exceptionalism the US has built a mighty military. The price for its grandiose military has been the neglect of the American people. The US is addicted to militarism and violence.

From its founding, the US was a violent country. It used violence to acquire and occupy the land and to gain independence from Great Britain.

The US maintained that God was on its side, and it was innocenct of any wrongdoing. The US just made it up that it was Manifest Destiny that it should become an empire. Americans saw themselves as being on a civilizing mission for God.

The Myth of Manifest Destiny

Movies glorifying and romanticizing the westward expansion of the US were an early theme of motion pictures. One of the first silent movies was a Western produced in 1903: “The Great Train Robbery”. Right from the beginning motion pictures created false narratives and myths.

Manifest Destiny was an expression of white supremacy. A 1915 silent move spectacle was The Birth of a Nation, which falsely recasts the Civil War and the Reconstruction Era. It portrays the South as a victim, depicts blacks as depraved, and the Ku Klux Klan as a heroic white protector of America’s virginity. After featuring the movie in the White House, President Woodrow Wilson said:

It is like writing history with lightning. And my only regret is that it is all so terribly true.”

Hollywood perpetuates America’s spirit of exceptionalism, often in cahoots with the power elites of the ruling class. Up until the late 1960’s Western movies were a regular theme, which was later adapted to television too. Movies, radio and television were revolutionary forms of entertainment, information, advertising, and propaganda in the 20th century.

When I was growing up in the 1950’s playing “cowboys and Indians” was a favorite pastime for children. We reenacted what we saw in the movies. For example, watch the below movie trailer for “How the West Was Won”, produced in 1963:

The phrase Manifest Destiny was not coined until the mid-19th century. But the ideology had started with the colonial settlement and ethnic cleansing of the indigenous people. As Sirvent and Haiphong explain:

George Washington and his secretary of war Henry Knox wasted no time in laying the basis for Manifest Destiny. Manifest Destiny was an alteration to the colonial ideology that led to the formation of the American nation-state…..Manifest Destiny presupposed that American expansion from coast to coast was a matter of ordained fate justified by the Republic’s superior civilization”.

The westward expansion of the US empire did not stop at the shore of the Pacific Ocean. It kept on going to Asia. The US became a colonial empire, and went knocking down the trade barriers of Japan, Korea and China. The US believed in “free trade”, even if it had to be at the point of a gunboat.

The Legacy of Slavery

The legacy of slavery continues to pervert equality and justice today. As Sirvent and Haiphong explain the US pleads that slavery was just a “peculiar institution” and not a contradiction of American exceptionalism:

“While It has been difficult to mask the horrors of slavery on subjugated Africans, it has been equally difficult to pierce through the narrative that the institution of slavery was a mere mistake or an aberration in an otherwise flawless American design.”

Saying that the US was built on the backs of slaves is not a metaphor. The early foundation of the US economy relied on slavery. The White House and Capitol were built by slaves; now that is a literal metaphor. Watch the following short debate on the subject:

Chomsky is correct; cotton was king. It was as important in the18th and 19th century, as oil is in the 21st century. Everybody wanted cotton, and the textile industry sparked the industrial revolution. Yet the emancipated slaves and their descendants have never received reparations for their contribution.

The US pleads innocence from genocide and slavery. The colonial settlers even blamed the victims. The African slave was characterized as being lazy. The Declaration of Independence accuses the indigenous people as being the following:

…merciless Indian savages, whose known rule of warfare, is undistinguished destruction of all ages, sexes and conditions.”

Privatization of the Native’s commons and slavery were enshrined in the Declaration of Independence and the US Constitution. The “pursuit of happiness” was code for stealing Indian land and enslaving blacks. That was the reason for the 2nd Amendment.

Another well-known legacy of early American history is the Monroe Doctrine, as Roberto Sirvent and Danny Haiphong explain in their book. The Monroe Doctrine sprang forth from President James Monroe’s lips as an extension of Manifest Destiny. Since God was believed to have granted the US possession of the continent, it followed that it should include the Caribbean and Latin America too.

In the 19th century Spain lost its grip on its colonial possession in the Americas. France had suffered major losses in the French and Indian War (1754 to 1763). The Napoleonic Wars (1801 to 1815) weakened France. Haiti, which was the “pearl” of France’s colonies, achieved independence in 1804. In 1823 President Monroe declared that the US would be the arbiter of disputes and protector of the Caribbean and Latin America from then on. With the victory of the Spanish American War (1898) the US became an empire with foreign colonies in Cuba, Puerto Rico, Guam, and the Philippines.

History is Not “History”, It Has a Life of its Own

American Exceptionalism and American Innocence is not just a history book, although it is that too. Sirvent and Haiphong examine historical events and the myths that justified them. For instance, after World War Two the US developed a messiah complex that it was the saviour of the world. The facts don’t support the myth. However, the US did come out of World War Two as the strongest economic and military power in the world.

During the post-war period the US used its economic and military power to expand its neocolonialism. The US opposed anti-colonial wars of liberation in Africa and Asia, as well as in its “backyard”. The power elites of the US ruling class framed the US’s neocolonialism as protecting budding democracies from the evils of communism. The US power elites hid their true economic motives in myths about freedom, democracy and human rights.

Critical thinking would expose the contradiction of the US supporting colonialism. In fact, the US secretly overthrew democratically elected governments that wanted to use their natural resources for the benefit of their own people. Early covert “regime change” operations were the democratically elected governments of Iran, Guatemala, and the DR Congo. The US has been overthrowing governments ever since. When communism was no longer available as a bogeyman, the US created a new villain with the War on Terror.

Since World War Two the US has been in 37 violent conflicts, which resulted in the deaths of an estimated 20 million people. The ruling class frame these conflicts as examples of American exceptionalism. The meme that the US is a force for good in repeated ad nauseum.

After twenty years of the War on Terror, the US has nothing to show for it. A half-dozen nations have been destroyed and millions of people killed. The cost to the US is guesstimated of $7 trillion, and still climbing. The costs to the countries that the US destroyed are priceless.

The opportunity loss of the War on Terror has been the neglect of domestic problems, such as inequality, poverty, hunger, and disease. Over 30 million people do not have healthcare. Public education is being dismantled, and higher education leaves many students in deep debt. US prisons are inhumane and rehabilitation isn’t even talked about. Little is being done about global heating. US infrastructure is decrepit and crumbling. The Bill of Rights has been eviscerated. Minorites are disproportionately affected by neglect and injustice.

The list of US failures to its people is long, but it can be summarized by the United Nations Index of Human Development.

Shockingly, while the US spends trillions of dollars on war, the US comes in at 25th in human development, adjusted for inequality. Don’t expect it to improve; the trend is down.

It is not enough to learn the real history of the US, and unlearn the fake history. The US must get over the illusion of its exceptionalism, innocence, and victimhood. The US really does not have any enemies that it cannot defend itself against.

Iran, Venezuela, Cuba, Nicaragua, and North Korea are not threatening the US. It is ridiculous to think that they are. Instead, other geopolitical and economic motives are in play.

The US cannot escape its history, but it can change the future. According to Sirvent and Haiphong, to change America’s future the American people need to learn the real history of the US, and unlearn the myths. A big step in that direction is found in the book American Exceptionalism and American Innocence: A People’s History of Fake News—From the Revolutionary War to the War on Terror.

Over the centuries the US has developed an illusion of grandeur. It imagines itself as indispensable and exceptional, unlike any nation that has ever existed. Exceptionalism means not having to say you are sorry or pay for your mistakes. Being exceptional means you are the law. You are the policeman, the judge, the jury and the executioner. Download granny 2.0

Professor Howard Zinn has already covered much of this ground in his book, A People’s History of the United States.

‘According to Sirvent and Haiphong, to change America’s future the American people need to learn the real history of the US, and unlearn the myths.’ – otherwise known as ‘the vast tapestry of lies’ as Pinter so memorably put it.

Reactionary forces in the media, in education, in politics and certainly in the economic sphere are unlikely to let trifles like truth get in the way of the Americas long-standing love affair with violence and exploitation (domestically and internationally).

WWII was seen as a great moral victory for the USA yet by the end of it they were dropping nukes on defenceless civilians while forming alliances with high ranking Nazis (once Stalin was cast as the new existential threat) – put another way what was more important to them new business opportunities or the moral fall-out from the holocaust?

Telling historical truths about the US only results in critics being ignored or vilified – the rap sheet is so gargantuan that it is now too too painful for most partriotic Yanks to process it.

One of the saddest aspects of U.S. history is the lack of acknowledgement of the HEROIC efforts of the working class, their work ethic and the generally high quality goods they produced.
The U.S. working class have been usurped, mind raped, belittled and exploited by the ruling class and their upper middle class mercenaries.
‘Messiahs’ don’t die, but those with ‘Messiah Complexes’ are as mortal as the rest of us. Thank fuck.