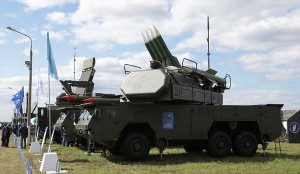 A photograph of a Russian BUK missile system that U.S. Ambassador to Ukraine Geoffrey Pyatt published on Twitter in support of a claim about Russia placing BUK missiles in eastern Ukraine, except that the image appears to be an AP photo taken at an air show near Moscow two years earlier