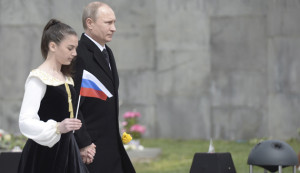 Russia’s President Vladimir Putin (R) attends a commemoration ceremony marking the centenary of the mass killing of Armenians by Ottoman Turks in Yerevan, Armenia, April 24, 2015. Armenia’s president said on Wednesday he was ready to normalize relations with Turkey, two months after he withdrew peace accords from parliament, blaming a Turkish lack of political will to end 100 years of hostility. Speaking ahead of Friday’s centenary of the mass killing of Armenians by Ottoman Turks which is at the heart of the countries’ animosity, Serzh Sarksyan said there should be no preconditions in restarting the peace process and would not insist the Turks accept they committed genocide. REUTERS/Alexei Nikolsky/RIA Novosti/Kremlin ATTENTION EDITORS – THIS IMAGE HAS BEEN SUPPLIED BY A THIRD PARTY. IT IS DISTRIBUTED, EXACTLY AS RECEIVED BY REUTERS, AS A SERVICE TO CLIENTS. – RTX1A34X