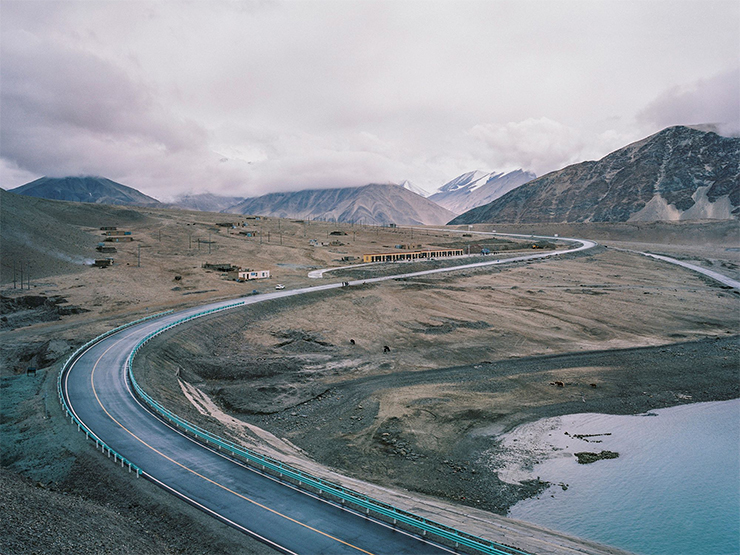 May 2016. Xinjiang province, China. View of road G314 in China, aka the Karakoram highway, the road linking the western Chinese province of Xinjiang with Pakistan through the Pamir mountains. On the right is the Baishahu lake. A new road should be finished by 2017 to increase trade between the two countries.

Xinjiang is the westernmost province in all China, located at the border of Central Asian countries, Russia and Mongolia. More than twice the size of France, it has only 22 million inhabitants, a majority of which are the indigenous Uighurs, a sunni-muslim Turkic ethnic group which has lived in the region for centuries. Tensions have nonetheless arisen in the last decade as a consequence of the en-masse migration of Han Chinese settlers and confessional persecution by the strongly secular governmental authorities.

Borrowing from romanticized notions of the American frontier, synonymous with ideals of exploration and expansion, photographer Patrick Wack captures a visual narrative of China’s westernmost region—Xinjiang. Whereas the American West conjures images of cowboys and pioneers, of manifest destiny and individualistic freedom, the Chinese West has not yet been so defined. It is a place of pluralities—of haunting, expansive landscapes, of rough mountains and vivid lakes, of new construction and oil fields, of abandoned structures in decaying towns, of devout faith and calls to prayer, of silence and maligned minorities, of opportunity and uncertain futures. It is a land of shifting identity. In essence, Xinjiang is the new frontier to be conquered and pondered. Literally translating to “new frontier” in Chinese, Xinjiang is a land apart, and has been so for centuries. More than twice the land area of France with a population less than the city of Shanghai, the Chinese province of Xinjiang once connected China to Central Asia and Europe as the first leg of the ancient Silk Road. Yet it remains physically, culturally, and politically distinct, an